This guide will provide an easy to digest intro to China’s famous cuisines with dish suggestions. I truly believe that the more knowledge you have about the local cuisine, the more rewarding your food experiences in China will surely be.

It’s fair to say that one of the key experiences in China is the diverse food cultures and cuisines. They are quite proud of their culinary abilities, and rightly so. Perhaps born from doing a lot with a little, they have mastered the use of natural ingredients, balancing tastes and bringing out amazing flavors.

Whether you are in China for a long stay or short, it’s useful to have a basic knowledge of the key eight great cuisines.

Overall, the cuisine is famed for lightly cooked fresh vegetables, medicinal soups, bbq meats, and dim sum. It is one of the most popular cuisines with foreign visitors. Dim sum is perhaps the most well-known product under Cantonese cuisine, it is incredibly popular throughout Guangdong and Hong Kong, and an important feature on local culture.

Originating in the Sichuan Province this cuisine is well known for its mouth burning and lip numbing qualities! Featuring bold flavors and spiciness via the use of lots of garlic and chili peppers, along with Sichuan peppercorn. Peanuts, sesame paste, and ginger are also prominent ingredients in this style.

Derived from the native cooking styles of the Huangshan Mountains region in China and is similar to Jiangsu cuisine, but with less emphasis on seafood and more on a wide variety of local herbs and vegetables.

With a long history, Shandong Cuisine once formed an important part of the imperial cuisine and was widely promoted in North China. Some consider it the most influential of all the cuisines. However, it isn’t so popular in South China (including Shanghai). Shandong Cuisine features a variety of cooking techniques and the wide use of seafood.

Fujian cuisine consists of four styles, which are

Known for its soft texture and use of ingredients according to the seasons. Jiangsu cuisine consists of many styles with Huaiyang cuisine being the main type. Other styles include:

The dishes are not greasy, having but instead a fresh, soft flavor with a mellow fragrance. The cuisine consists of at least four styles, each of which originates from different cities in the province. 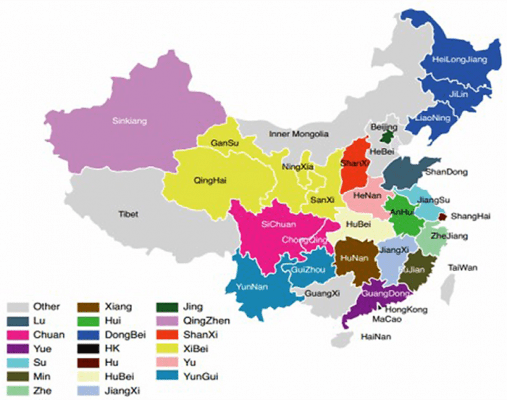 Other cuisines of China

Tibetan Cuisine (西藏美食) – Dishes include Roast mutton chops, Yak meat, Pickled Radish, Shapale which is like a meat pie and momos which are a dumpling available with either meat or vegetable filling. Drinks include Barley Wine and Buttered Tea.

Hakka cuisine (客家菜) – is the cooking style of the Hakka people, who originated in the southeastern Chinese provinces of Guangdong and Fujian, but may also be found in other parts of China and in countries with significant overseas Chinese communities. Dishes include salt-baked chicken, duck stuffed with rice, Yong Tao Foo which are noodles in clear consume with all sorts of bits and bobs like tofu, fish balls, meat etc.

Mongolian cuisine (蒙古美食) – With Mongolia itself having an extreme continental climate and the people traditionally having a nomadic lifestyle the cuisine primarily consists of dairy products, meat, and animal fats and the use of vegetables is perhaps limited by lifestyle and conditions. Mongolian cuisine is also influenced by Chinese and Russian cuisine.

HK cuisine (香港美食) – Hong Kong cuisine has Cantonese cuisine (Yue) at its core with history having played a role in its cuisine expansion to become a melting pot of global food culture. Along with Cantonese cuisine, in HK you’ll find western foods, many types of cuisines from mainland China, Japanese, Korean, Indian are all easy to find, there’s also lots of fusion between European, Western and Asian food cultures which is a fantastic thing. A few unique Hong Kong specialties include Pineapple buns, Lap Cheong (sausage),  Hong Kong Milk Tea and Yin Yang (coffee and tea), Hong Kong-style French toast.

Jing cuisine (京菜) – being the capital city of China it’s cuisine has had influences from all over the country, especially Shandong, along with cuisines that grew from the days of the “Emperor’s Kitchen” inside the Forbidden City. It’s very snack orientated such as Beijing yogurt served in stalls or Xian Bing which is a wheat-based dough that can have a variety of fillings. Popular dishes include the well known Beijing Duck or Peking Duck, Zha Jiang Noodles, Mongolian Hot Pot.