After a suprisingly good nights sleep at the hotel, that saved me from a night on the streets of Chengdu, I woke to see a beautiful haze, a lovely light grey in color impenertable by the sun, my first morning in China. At first I thought smog, but actually its just a haze for whatever reason becuase the air seems quite ok here.

I began the challenging task of trying to ask the helpful girl at hotel reception to organise a taxi….due to my non-existant mandarin skills it was some time later and we were still going around in circles about booking a taxing and where this taxi might take me…

I can only imagine her frustration at thinking what on earth is this guy doing, coming to china with no language skills, no plan and no idea….hehe

The taxi thing was going nowhere so I asked with hand gestures as to the direction of the city and headed off in to the yonder.

As I got a little way down the road the gravity of the task ahead started to hit me. I didnt understand any of the road signs, I didnt have a map, I didnt have a working mobile phone and on a scrap of paper I had the address of a hotel that I hadnt even made a resevation at yet….at least I thought I did.

The area i was walking through looked like most of it was under development, some grimmy old hi rise dewellings and offices, to the right there was a lot of cleared land with construction work going on in every direction. Lots of construction work…I must be on the outskirts of town.

It was early in the morning and people where lining up at bus stops and the traffic was starting to grow. Walking along the road looking towards one of the bus stops I noticed lots of guys hanging around in cars, sometimes even parked up on the footpath..it was pretty easy to work their game out, they where touting for fares! Private taxis if you like…the real taxis, green and yellow in color, where scooting up and down the road all with passengers.

Along with the people with cars touting for fares there where also a few people on mopeds offering lifts to those waiting for a bus. As I walked through the crowd of people, and started to realise by the long staring glances that, um, not many foreigners must get around these parts…Actually, now I think about it, I was the only one on the plane, none at the airport, none so far…hmmmmm.

As I crossed the road there where push bike pedi-cabs everywhere, so, there where private cars, mopeds and now pedi-cabs all circling the bus stop like vultures over a dead carcass…it was a bus stop in the middle of what seemed like nowhere…

As I walked past another couple of these private taxi cars I hear a ‘helloooooo’, yes with real extension on the ‘oooo’ bit. I quickly gave a hello back and then he started pointing at his car and talking in chinese. ‘English’ I asked inquisitively, he waived his hand to express no english.

I pulled out a peice of paper and wrote down ‘ATM – Bank of China’, i needed cash as i had only got out enough last night to pay for the hotel…not sure what i was thinking there…anyway, I pointed at the note and the guy was all to keen to have a look at it. A long look. I said ‘bank of china’ and pointed down the road towards the city, he chuckled and pointed down a street to the right, and said ‘bank’..off I went.

A little way down the road and after many long, glaring inquisitive stares from the locals, I found a Bank of China branch.  ATM’s in China are not really any different to the ones here except that it’s in chinese, luckily they have numbers on the keypad that you and I can understand and you simply select ‘english’ on the display screen. The ATM even talks you through the process.

Cash in hand, I thought its time to get a taxi, couldnt see any green and yellow cars buzzing around here so I walked back to the road I came from. I looked for my bit of paper with the hotel details on it…uh oh…uuurrrggghhh. Unable to find that I pulled out the lonely planet guide (hmmm, why didnt I do that earlier!) and found the name of a major shopping in the city. It was at least something to point at.

After a few more stares, and another ‘hellooo’ from a store owner standing out the front I got back to the street I was at before and managed to hail a cab, hailing a taxi it seems it a universal standard process of standing on the edge of the road and waiving your hand in the air, execpt in China you need to fight your way past the vulture like pedi-cabs and private taxis…From what I’m told you are somewhat safe in Chinas taxis, they are heavily regulated by the government, say no more!

Holding out the map and pointing towards this spot I was soon on my way and 15 minutes or so later we pulled up in what I guess was downtown Chengdu, modern multi level shopping complexes everywhere and a people, cars, buses, and you name it, heading in every direction.

I jumped out of the cab and thought, I really have no idea…I’m looking around and by the stares and glances i’m getting. Im thinking they dont get too many westeners here! Which is confirmed by the fact that I still havent seen any. What to do. Ive lost the address for the hotel, I still dont have a map, and its not like I can just start asking people for help, they wont understand a word!

Nothing like having an entry strategy….hmmmm, the internet would be real handy right now, I’ll google my way out of this! Picking up my bag and turning around it was hard for me to believe what I just saw…Starbucks. Im not really a fan of Starbucks coffee, but today I am. I walked in and saw a dual language menu and as I approached the counter I get ‘hello, what would you like’. The staff all spoke english, the place was a mirror of any Starbucks you would see anywhere else and of course, free wi-fi. Saved by the global reach of American entrepreneurship…

I stayed there for about an hour, enjoying the comfy chair, coffee and free internet. It was a real comforting place to be, like sitting in a western embassy of some kind…I got the address of the hotel and guess it was some way away, so off I headed to get another cab..

This time I was not to be so lucky, the first cab I manged to hail wouldnt let me in, waiving his hands in crossways manner, hmmm, perhaps some foreigner upset him once before. So I moved on and kept trying.

Having walked around for a while now I still havent seen a foreigner, not one. Re-confirmed by the long curious stares. And this is no backwater, this is a huge city and I’m walking around the central district wich is packed with glitzy modern stores including many major western brands. Occassionaly I would get a ‘hellooo’ particurlary from pairs of girls who would be walking down the street holding hands, after saying hello in a curious manner they would then start giggling and quickly scuttle off. 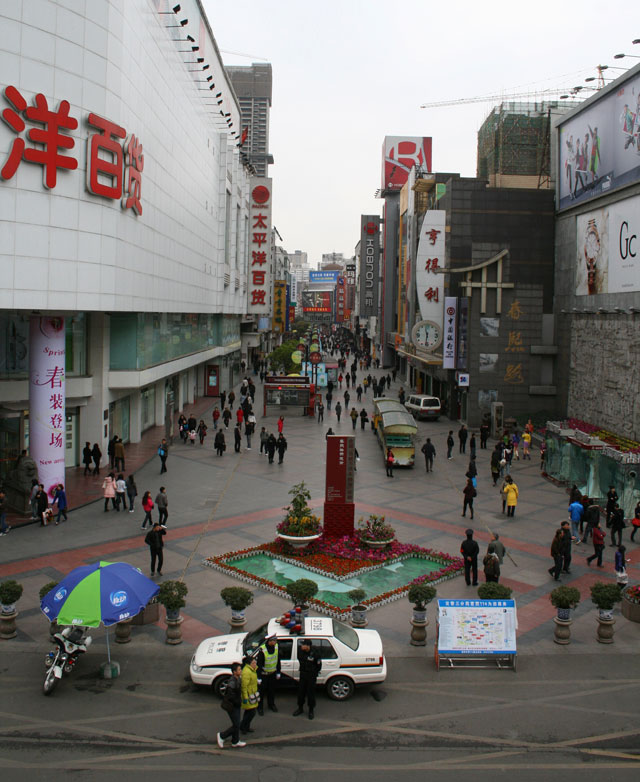 One guy in a business suit stopped and said hello, we had a breif couple of words about the sprawling mass of modern shops we could see from the overpass we were walking over before he continued on his way.

Back to cab hunting, the next cab was a little more freindly and I showed him the address, fortunately he could speak a little english and but he couldn’t understand the english version of the address I had written down. Appologising he hinted he had to keep moving.

I tried a couple more cabs with no luck and decided to just walk in the direction of the hotel, why not, I get to see some of Chengdu. After discovering that the street names on the Chengdu map in the lonely planet book dont match the names on the street signs I choose to ignore it and just head north. It was a huge walk and with a little help from the local police who can speak some english and are suprisingly keen to help out, I got there.

I started from the other hotel at 8am and made it to the Tibet Hotel in Chengdu after 3pm. I was glad to be there…

I think I got a lesson, China is not the easiest place to be so disfunctionly disorganised….