Here is a list of super delicious dishes in China that can be found in most cities and that visitors to China will love at first bite.

For the new visitor, Chinese cuisine can seem a little intimidating and even altogether scary when not well understood, it can take a little while to adapt and for some, it may be a bridge too far. Dishes such as fried duck head (鸭头), fertilized eggs (活珠子), pigs blood jelly (血豆腐), or even steamed chicken feet (豉汁蒸凤爪) may turn off many a new visitors stomach. But, don’t fear, there are plenty of foreigner-friendly foods to start your China journey with.

Here is a list of some of the dishes from various cuisines of China that are readily available in most major cities across China, and best of all, they are delicious. What’s not listed, as many lists do, is Americanised Chinese food, these are all authentic dishes of China.

If you are traveling in China, keep this list handy as I have included the Chinese names so you can show it to anyone and get directed to the nearest restaurant or street stall. 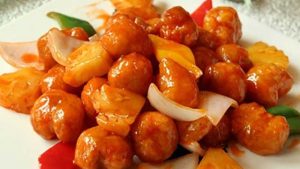 Cuisine: Cantonese
Sweet and sour pork is one of Guangdong’s traditional feature dishes. This dish began in the Qing Dynasty and was very popular with Europeans and Americans in China at that time whose first contact with China was Guangdong province and Cantonese cuisine. Cuisine: no specific cuisine but originates from Nanyang, Henan
The humble dumpling has a history of more than 1,800 years and is a traditional specialty food that is popular among the Chinese people and especially so with foreigners. It is also the must-prepare dish during the Spring Festival which are eaten on the eve of Chinese New Year. There are inumerate variants using all kinds of combinations of vegetables, pork, prawns etc and can be steamed or steamed and fried. 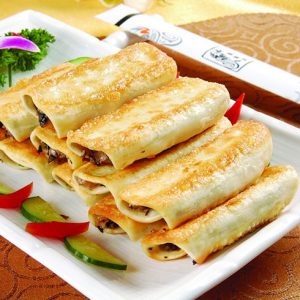 Cuisine: no specific cuisine but originates from Henan or Guangdong or Liaoning according to three differing legends.
The cause of many debate, but Pot stickers and fried dumplings can not be confused. The two are not the same. The difference is the cooking technique also filling recipes differ along with origin. Potstickers are cooked in the pan, fried dumplings are boiled and later fried. Shapes also differ. Regardless, they are equally delicious! 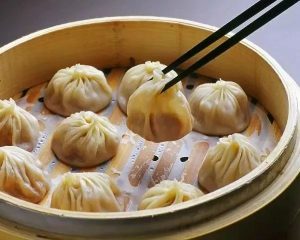 Cuisine: Jiangnan Cuisine/Jiangsu Cuisine
This soup style dumpling dates back to the Northern Song Dynasty (960–1127) and the ancient capital Kaifeng. It was refined during the Song and Qing eras to become what we know today as the Xiaolongbao (that originates from Changzhou). It is a famous traditional snack in Jiangnan area and especially popular with foreigners visiting Shanghai. There are many variants nationwide from small bite size pieces to large bun style soup dumplings that come with a straw. 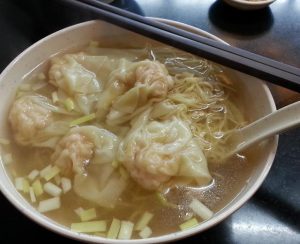 Cuisine: Catonese Cuisine
A staple dish in southern China and Hong Kong, wontons are small bite sized dumplings typically served in a light chicken broth with noodles. The wonton skins are made of eggs and flour and the fillings are usually made from pork, vegetables (such as coriander, celery) and chopped green onion, and also mixed with shrimp, fish, egg yolk, mushrooms. You can aslo order wonton without noodles, and fried wonton is popular in HK. 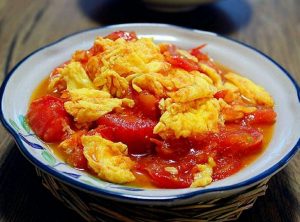 Cuisine: Shangdong cuisine
Whilst it sounds simplistic and bland, it’s actually a magic combination and a common staple dish in China. This dish also raved about for its nutritional properties along with being super delicious when cooked with the right technique. 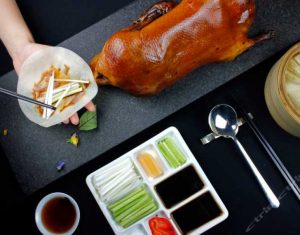 Cuisine: Beijing cuisine
According to legend, the beauty of roast duck is derived from a thousand yearl old breed of duck that was especially bred for this purporse. What we do know is that it is the most famous dish of Beijing and is absolutely delicious. The competition between restaurants and chefs over who has the best Peking Roast Duck is fierce! The most famous is Quanjude (全聚德) which originated in 1864 and has many branches operating today worldwide as well as its original store at No.30, Qianmen Street, Beijing. 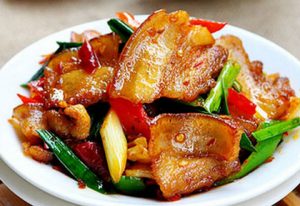 Cuisine: Sichuan cuisine
The pork meat is boiled, cooled, and then fried along with ginger, garlic slices, onions, peppers, bean paste etc. Can be a bit spicy for some. Another dish with a long history dating back to the Northern Song Dynasty and refined to what we see today in the late Qing Dynasty. Cuisine: all cuisine
If there was one ubiquitious food in China across all regions and cuisines this would probably be it. It is a common breakfast staple coming in variants with fillings including pork and cabbage (猪肉白菜包子) being the most popular, or shredded vegetables, etc. In Cantonese cuisine there is the famous BBQ pork bun. There are aslo sweet versions with custard, red bean etc. Mostly they are steamed, sometimes steamed and fried on the botttom. Too many varities to mention and it’s hard to find one that is not delicious. It’s origins date back to the Three Kingdoms Period (220-280). Cuisine: Cantonese cuisine
Popular in Hong Kong and Guangdong it is a reltively recent dish consiting of a fried dough stick, special sauce, and wrapped in a rice roll. A popular breakfast snack and delicious. Cuisine: Cantonese cuisine
Morning tea, where the family gathers for breakfast is longstanding tradition in Guangdong and its easy to see why its stood the test of time. Dim Sum (or Dian Xin/Yum Cha/Zoacha) presents a large range of bite size dishes to choose from which are time proven favorites. It would be hard to find someone from any region of the world who didn’t greatly enjoy dim sum. 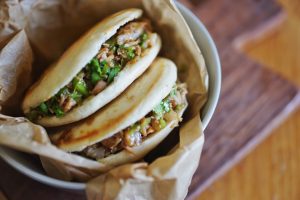 Cuisine: Shaanxi cuisine
Its history can be traced back to the Warring States Period where the meat gravy
was made from pork belly with the addition of 20 different spices. The bun is a flour bun that is crisped on grill before being stuffed with gravy and it is super delicious and super comfort food. Cuisine: Cantonese cuisine
Rice rolls are ubiquitious across Guangdong and a popular breakfast staple. Fillings for the rice roll include pork or beef, shrimp, greens, eggs, and vegetables. It’s origins can be traced back to the Tang Dynasty (618-907 CE). 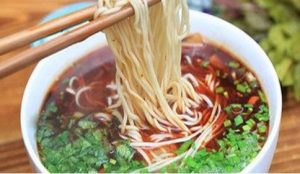 Cuisine: Gansu Cuisine
The dishes claim to fame is the hand pulled noodles which involve a range of techniques from the dough to the art of ‘pulling’ the noodles. The broth is made from beef bones and chicken fat and spices. A reecentl dish compared to some on this list that dates back some 200 years to the Qing Dynasty and became popular in the 1980’s. 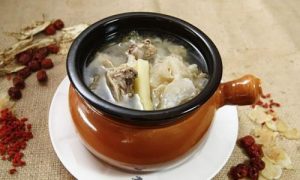 Cuisine: Cantonese cuisine
For many years, soup has become an indispensable part of Guangzhou people’s life and it has become the established pattern of the banquet in Guangzhou to drink soup before meals. Loa Huo Tang is considered a tonic and there are numerous recipes with differing properties. Cuisine: Cantonese cuisine
Pork roast is a traditional dish in Guangdong Province, It has a red color which comes from the glaze, it is succlent and slightly sweet. The pickled lean pork is hung on a special fork and placed in the oven for grilling. A good pork roast should be soft and juicy, with a bright color and a fragrant smell. 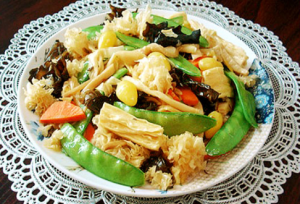 Cuisine: Cantonese cuisine
The vegetarian dish dates back to the Song Dynasty where it was a favorite of monks and became popular in the wider community. This dish is somewhat symbolic as well as delicious, named after the eighteen arhats, it is a “family portrait” of the temple flavor, and is carefully prepared with 18 kinds of fresh fragrant ingredients. 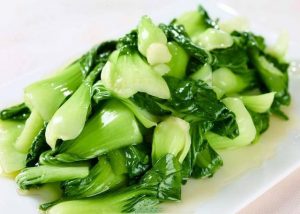 Cuisine:all cuisine
Most all restaurants will have several wok fired vegetable dishes. They may be mixed vegetales but usually single vegetable such as Chinese cabbage/bok choy with garlic and soy/sesame oil sauce. Cuisine: Shangdong cuisine
Made from an uleavened flour dough that is rolled out into thin layer and fried, often in scallion oil. Sesame seeds and fresh scallions are often added. 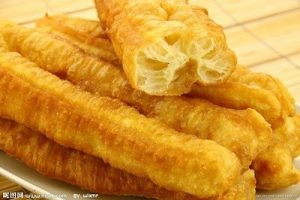 Cuisine: all
A breakfast staple across the country where it is eaten alongside soy milk (doujiang). It can be eaten as it is, crispy with a slight chewiness, or it can be adden to a Jianbing, wrapped in a rice roll (zhaliang), or dipped in hoisin sauce. It has origins in the Song Dynasty. 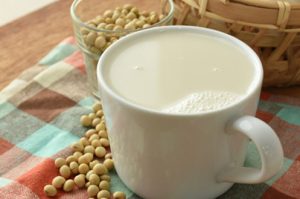 Cuisine: all
A popular staple breakfast drink consumed alongside youtiao. Soymilk originated in China, and it was said that it was invented by Liu An, the Huainan King of the Western Han Dynasty more than 1900 years ago. 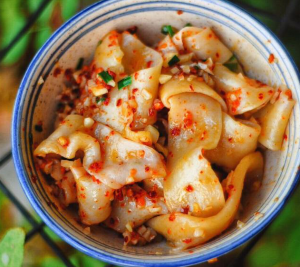 Cuisine: Shaanxi Cuisine
It is said to have a history of more than 3,000 years. The noodles are thin and broad made from a flour dough which is formed into wide long strips. The noodles are typically served covered with a hot peanut oil with a small amount of ginger, onion, chili, and maybe chives. recipes differ shop to shop.