Xiong’an New Area (CN: 雄安新区) is a new mega urban area and smart city project that encompasses three counties and 500 villages located in a strategic area that lies within the Beijing-Tianjin-Hebei triangle. What makes this project unique is, not only the scale and the vision, that it is directly under the management of the CCP Central Committee and the State Council.

What also makes it something special is the price tag, with some research firms quoting figures between 1 and 2.4 trillion RMB.

The three existing counties that make up Xiong’an New Area are Roncheng, Xiongxian, and Anxin which are located 100km to the southwest of Beijing. The area will be connected by High Speed Rail via the Beijing-Xiongan intercity railway which connects to the new Beijing Daxin International Airport taking just 20 minutes to travel between the two and 30 minutes to central Beijing. 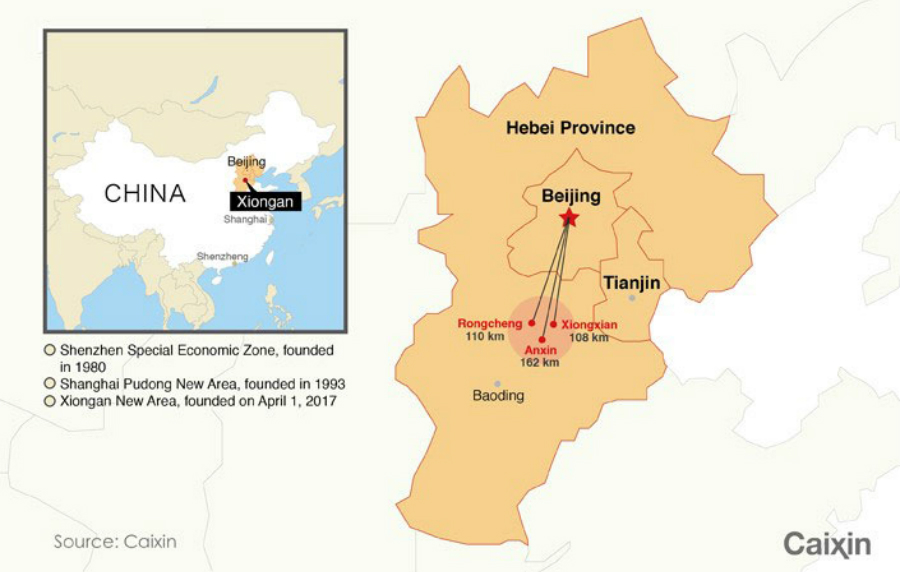 The area was officially announced on April 1, 2017 with a master plan later released for an initial area covering a 100 sq. km later expanding to 2,000 sq. km area. 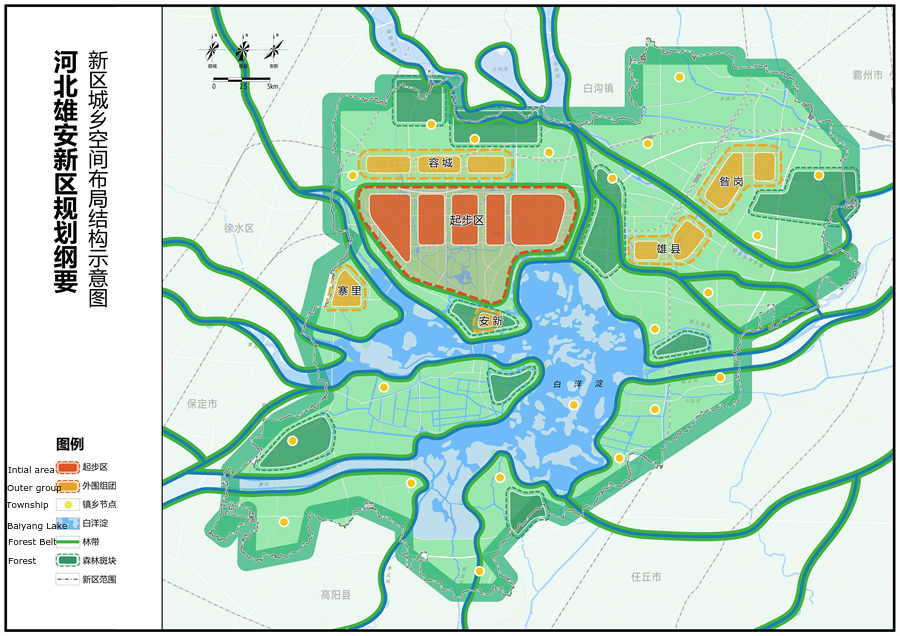 The planning and construction phase is expected to run until 2022 following which is followed by the relocation phase and shifting of several state-owned enterprises into the newly developed area from Beijing and beyond which is expected to take until 2035. The next phase from 2035 to 2050 is to develop the area into a modern socialist city to which there are only vague specifics as to what may look like.

It has several goals including

Ecology will also be a key theme of the area with forestation and development of wetlands. A major ecological feature is Baiyang Lake (CN: 白洋淀) which covers a staggering 336 sq km and after some revitalization that started back in 2006 it is now an AAAA national rated scenic area.

Another feature often mentioned is that it may include heavily subsidized living costs (all properties are state-owned), along with first-rate medical, schools, and public services for local talents and innovators that move to the area. This may have an odd twist, as to live in Xiang’an you won’t be required to have a Hukou (residence permit) but instead, a work permit acquired via having a work contract or business license. And once you finish the contract etc ability to stay in public housing is rescinded according to some early reports but I think clarity on those details is a long way off.

Investment into the area is also being helped along by the City of London who have established a finance centre to fund sustainable projects with a focus on the new area. London’s Canary Wharf Group have also joined a consortium of developers who will be working on building the new area.

Returning to transport connections, in total there will be five High Speed Rail lines that connect the Xiong’an New Area via two stations namely Xiong’an Station and Xiong’an East Station. The five rail lines are

“New Area” is not a term that you will hear often and is used to indicate that it will be a testing ground for new ideas.

Many may want to compare this with Guangdong and the Guangzhou-Shenzhen-Hong Kong area, but immediately there is a notable difference in that one was founded from market-led concepts and grew exponentially from that liberation, while the other is a state-funded development where organic growth has not been achievable.

Also remembering that residential real estate was a major contributor to Shenzhen’s boom which won’t be a factor in Xiong’an with all housing being state-owned.

Furthermore, Guangdong attracted not only tech talents, innovators, entrepreneurs, and traders in a purely utilitarian directive, it also let them make it their home and be part of a community, something that may not be possible in Xiong’an making the character of the area somewhat, well, odd. But, I think it would be unfair to speculate on that too much until further details come out.

Some reports are even explicitly calling Xiong’an the next Shenzhen. For the same reason stated earlier, the two are very different models of development likely to have very different outcomes and characteristics.

Xiongan New Area will be a testbed for large-scale central planning and implementation of socialist principles under the guidance of President Xi Jinping.

All of this makes Xiongan New Area a pivotal place to watch as it will be the testbed, or laboratory, for pilot schemes, new technologies, new industry, and urban planning that will become China’s future.