In China there seems to be plenty of privately run bus services running here, there and everywhere but for a foreigner it’s usually much easier and simpler to just buy a train ticket. But in some cases the going via bus can provide huge time savings.

This is especially the case going from Xiamen to Shenzhen (or even Hong Kong). At the moment there isnt actually a train running direct between those places, but they are building a line to carry a fast (220km/h) train which is expected to be completed some say late this year, some say next year.

In the mean time the only way to go via train is to catch the K636/637 Shenzhen to Fuzhou train and get off at Yongding, or probably even better Longyan and then take a 2-3 hour bus ride to Xiamen.

It’s an ok way to go if you want to visit the Toulou buidlings of Fujian Province but otherwise it’s a 8 hour train ride then 3 hours on the bus.

The fastest and most direct way, other than flying, between Shenzhen and Xiamen is to go via bus. For me booking the bus was easy, the kind people at the V Inn at Xiamen took care of it all.

The booked a bus to leave around midday and got me into Luohu of Shenzhen at around 9pm. They even organised a shuttle bus to take me from the hotel to the bus station and the whole lot cost around 180RMB which is similar price to the train/bus option.

The bus was reasonably modern, albeit in need of a good clean it was acceptable. The best part was the huge luxurious seats, think airline first class style seating. The bus is air conditioned and has a toilet. 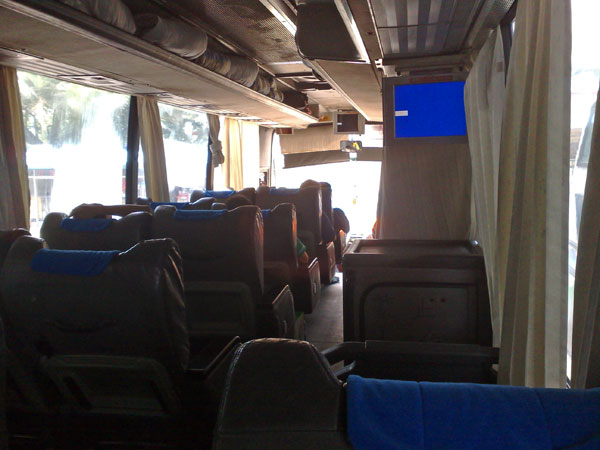 The bus also makes a 20 minute stop just after half way distance at a roadhouse which has toilets, snack shop and restaurant.

The bus terminates at bust station not to far from Luohu Station, perfect for me, I simply caught the subway back to Nanshan District.