After nearly one month on the road things had started to catch up with me, I was tired. Apart from being on your feet 12 hours a day, walking up things, down things, getting lost then more lost, there’s also the mental load as you never stop thinking. Even simple tasks become complex in country where you don’t speak the language.

Now that I think about it, it’s been a constant mental and physical load for the time I’ve been here in China, apart from the relaxing phases when I have had wonderful guides that have made things so easy!

When your traveling it’s hard to see the exhaustion coming. You are simply so excited and stimulated by the environment around you that miss the signals, plus the fact that driven to overcome the challenges of being in a foreign environment. In Beijing it all caught up with me.

My legs were tired, actually my whole body was tired. Then I caught a cold. Fun. But I didn’t want to hang around in Beijing, it’s just too expensive, not that easy to relax and not overly interesting. So I marched on through the must see sights of Beijing starting with Jinshang Park.

Every major attraction in China has numerous security guards or police guards, you cant help but feel safe in major public places. And one particular guard at the park wouldn’t let me out of his sight. Hmmmmm, I know these people are extremely paranoid about influenza and I guess I’m looking like a pretty good candidate at the moment. I walked off and over to the next temple in the park and 5 minutes later guess who’s there. Ok, thats freaky. So I kept taking photos in between blowing my now constantly running nose. But some time later this guard is still on my tail.

I’m not keen on pushing my luck, and I’m not real keen on being stuck in some quarantine becauseI have cold. Maybe I was being a little paranoid about the guard but I needed a solution and needed to get rid of this runny nose and its associated symptoms. So, ok then, where to find a chemist.

If you planned your overseas trip well you would probably write down english translations of these sorts of things, but I had nothing. I took my chances and hailed a taxi.

After 5 minutes of charades the taxi driver had no idea what I wanted, but I have to admit he was patient. He waited while I searched through the Lonely Planet Guide which has some handy translations in the back of the book. It had translations for ‘im sick’ which was true but incredibly unhelpful in this situation, there’s ‘i need a doctor’ but things are not that bad, theres ‘it hurts here’ which i’m sure the driver would really want to know. Lots more, but no chemist.

I had some audible phrases in my phone, so I searched those and eventually found ‘drug store’, hmmmm, i’m asking a taxi driver to take me to a drug store, who knows where i’m going  to end up! I played it and he smiled, ‘ok, ok’  he said, turns out he knows some english!

After driving around and around we found a chemist and in I went. I was greeted by four smiling giggling girls dressed in white nurse uniforms. Hmmm, am I at a chemist or somewhere else….The more I spoke the more they giggled so I guessed that no one speaks english. This is going to be fun!

An older gentlemen dressed up like a doctor/chemist walks out, and I’m going to assume that he was such, says ‘hello’ with a big smile. Cool this guy speaks english, so I told him i had a cold, and got a blank look. Ok, ‘hello’ is his english limit. On to charades again.

After pointing to my nose and acting out blowing my nose into a tissue, then coughing, then pointing to my head, then making facial expressions as if I was sad in sick, I got some more giggles from the girls then the chemist smiled, said something I didn’t understand and grabbed a couple of boxes off the shelf.

He tried to explain with what they where but that was going nowhere, and the box labelling was all in chinese characters so I just had to exercise a little blind faith. Through hand signals, and pointing at his watch, he did manage to get through to me that I was to take 2 pills every five hours. I handed over the cash and went on my way. 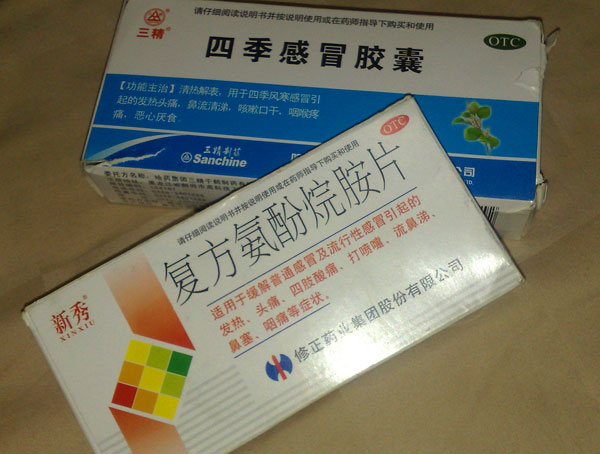 After a day of rest and taking these pills from two different boxes I started to feel good enough to get back into sight seeing and exploring. It still wasn’t much fun but at least I could see these places and move on. I went on to Beihai Park, Summer Palace the next day, the Forbidden City the next etc. etc. but it was slow going and more like a chore than the exciting experience it should have been.

I really couldn’t have done any of that without the medicine that chemist gave me, it really did get me out of a hole. I was still very tired but at least i wasn’t a total mess. It turns out the pills in one box where a traditional chinese medicine from natural plants and in the other box was a western style anti-histamine.

I spent more time in Beijing than I wanted too, but by the time I left the cold and its symptoms had gone. I was still tired, and would carry this tiredness for sometime. So maybe there’s an important lesson when planning a multi-destination trip of several weeks in length, fit in some decent rest days!

Footnote: in fairness to the Lonely Planet China book I later found a translation for chemist listed under ‘Shopping and Services’ rather than the ‘Health’ section.  Chemist/Pharmacy in mandarin = Yaodian.