It’s quite amazing, one of the most asked questions on travel forums about China is about toilets. Questions such as “what are the toilets like”, or “Toilet Paper :} Is it really a problem?”, “No Western Restrooms in China! Yikes!”.

If you’re coming to China, it’s something you’re going to have to get comfortable with, the toilets are different. If you get familiar with the different style, truthfully, it’s not so bad. You can do it!

Technically, you have to do it, so, let’s find on how and I’ll even give you a super secret tip on how to go in style.

1. Tourist attractions: On a national holiday, on a hot day, wow. First, you could find yourself lining up for 20 minutes (or more) and then when it’s your turn, wow. You’ll wade through the pee soaked floor, only to wait again if it’s number 2’s, and you’ll need to stand by that cubicle door without an inch of room to make sure someone doesn’t cut in front of you as the previous depositer departs.

Golden Rule: go at your hotel before hand, be prepared for waiting, block your nose, and when you hear the flush, stand by that cubicle door with vigilance.

2. Toilet Paper: Imagine this, you’re awesome new Chinese friends took you out for dinner last night to enjoy the local super spicy extra chili Dandanmian, which was dropped at the table by dude holding it with his thumb inside the bowl, the thumb that was last washed and nail trimmed at the beginning of the cultural revolution. It’s the next day and you’ve run out of Imodium tablets. You run to the toilet, waiting, sweating, then finally getting in and letting loose, phew! But, oh no, there’s no tissues.

Many Asian toilets don’t use paper at all, they may have a hose as a bidet, or water pale, using their hands to clean, actually, you may find the Chinese are much closer to western style than other Asian cultures.

3. Learning to squat. Physically this is very hard for some foreigners to do as we have much tighter calf muscles which would take weeks of stretching to be able to achieve a flat footed squat. Another reason is that some of us are simply too fat. 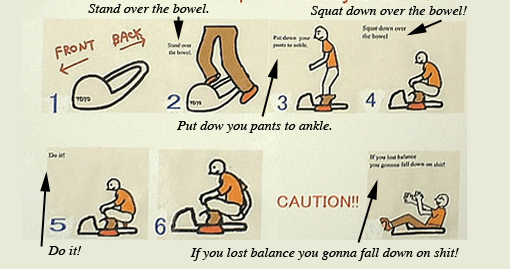 At first attempt, it’s a really awkward affair, you’re going to be worried that you’ll pee on the back of your pants, all while struggling to balance yourself and not fall in! To start off, you may find it easier to reach behind you and pop your hand on the wall as a steadier.

Golden rule: don’t pee on yourself or worse, hang onto something if need be

At first, squat toilets seem an undignified proposition, but actually they are cleaner, no skin comes in contact with the bowl, and apparently, the squat position is much better for health. After time, trust me you do become quite comfortable with it as your calves stretch. 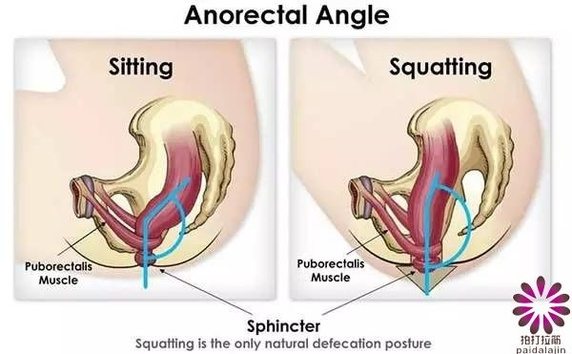 4. Flushing. Western toilets are like receptacles for all kinds of junk, a kind of all-purpose disposal unit, no so in the Middle Kingdom. Much of the Chinese plumbing can’t handle anything but human waste and will choke on a mere tissue, thus the little bins inside the cubicle. Older toilets won’t have running water, so there’ll be a bucket of water with a ladle to wash it all away.

Golden rule: don’t block the pipes and cause a septic back flood by trying to flush your junk away.

5. Common washrooms. Many male and female toilets share the hand wash basins in a common area.

Golden rule: make sure your zipped up before heading out.

If you want an advanced toilet how about Wi-Fi, ATMs, turbo-flush and TV’s? A new toilet revolution is taking place in Beijing it seems. 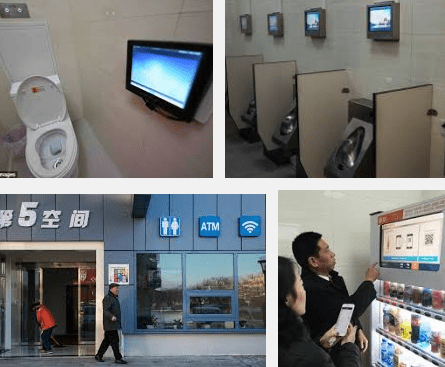 THE super secret tip for taking a dump like a king in any city you visit?
Four and five star hotels all have lobby toilets, be sure to take a newspaper and enjoy your time.

How to ask where the toilet is?
it’s quite simple, “cèsuǒ zài nǎli” meaning ‘toilet at where’, or even easier, look lost whilst expressing a sense of urgency and say “WC”. WC is a common name in English for toilets, taken from American culture being short for Washing Chamber.