The Ming Tombs in Beijing is a massive area featuring mausoleums for 13 of the 16 Ming Dynasty Emperors, also buried at the site are empresses and concubines of the era.  Only a couple of the tombs have been excavated, many are still sealed awaiting the progress of technology to provide a means of preserving everything that is inside once they open the tomb.

On my first visit, I was still feeling pretty ordinary from a bout of travel exhaustion so I chose to join a tour group to see the Great Wall rather than go through all the challenges of how to get there and back. I asked the tour desk at the hotel and they got me into a tour the next morning (Later in the post I am going to include all the details you need to do a self-guided tour of the tombs).

A minibus picked me up from the hotel early in the morning and off we went, all three of us, a grand total of five including the driver! Cool, this could be OK! First stop was the Ming Tombs.

It’s another display of China’s history and the extravagant life of its former emperors. The guided tour rushed through this area and I wish I could have explored the area more, but this is an organised tour, and the tombs are spread out over a very large area, also I think was the ‘there it is, ok, let’s go’ version of a Ming Tombs tour. I suggest a much better experience is to be had by charting your own course and the info below will enable you to do such.

The other problem with guided tours is the stops at shopping halls where the guides will earn a commision from anything you buy, so, be wary of low-priced tour tickets.

Of the 13 tombs, only three are open to the public being Dingling Tomb, Zhaoling Tomb, and the Changling Tomb. The other essential site is the Sacred Way which leads to tombs. 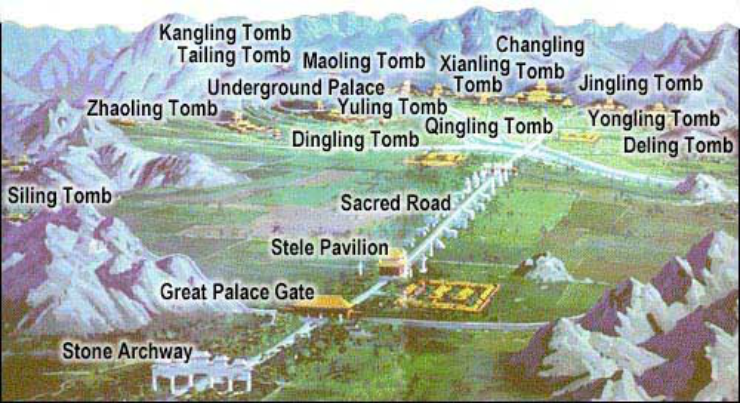 Of the 13 tombs, only three are open to the public being

The 13 Ming Tombs and their emperors

Here is something interesting about Chinese emperors, they had a convention of naming their reign as if to give it a theme or slogan. For example, Zhu Di who ruled from 1402 to 1424 named himself the Yong Le emperor, Yong Le translating to perpetual happiness.

The Entrance & The Sacred Way

Sometimes referred to as the Spirit Way or Divine Road. It is symbolic in that it represents the path to heaven.  It also incorporates Feng Shui, as does the entire site, with the road being on a North-South axis. The Stone Archway is one of the first built in China and also the largest. Through the Palace Gate, and further along, you will find the Stele Pavilion, featuring a giant turtle with an inscribed stele. The stele holds a tribute to the Yong Le Emporer (Zhu Di), and record of tombs including costs, and also a record of why the Ming Dynasty fell. Further along is the sacred way, featuring stone pillars and stone sculptures of officials, lions, haetae, qilins, horses, camels, and elephants. Then through the Lonfeng gate over the bridge and the road leads to the Changling Tomb of the Yong Le Emperor (Zhu Di).

Key Sights of the Entrance & The Sacred Way 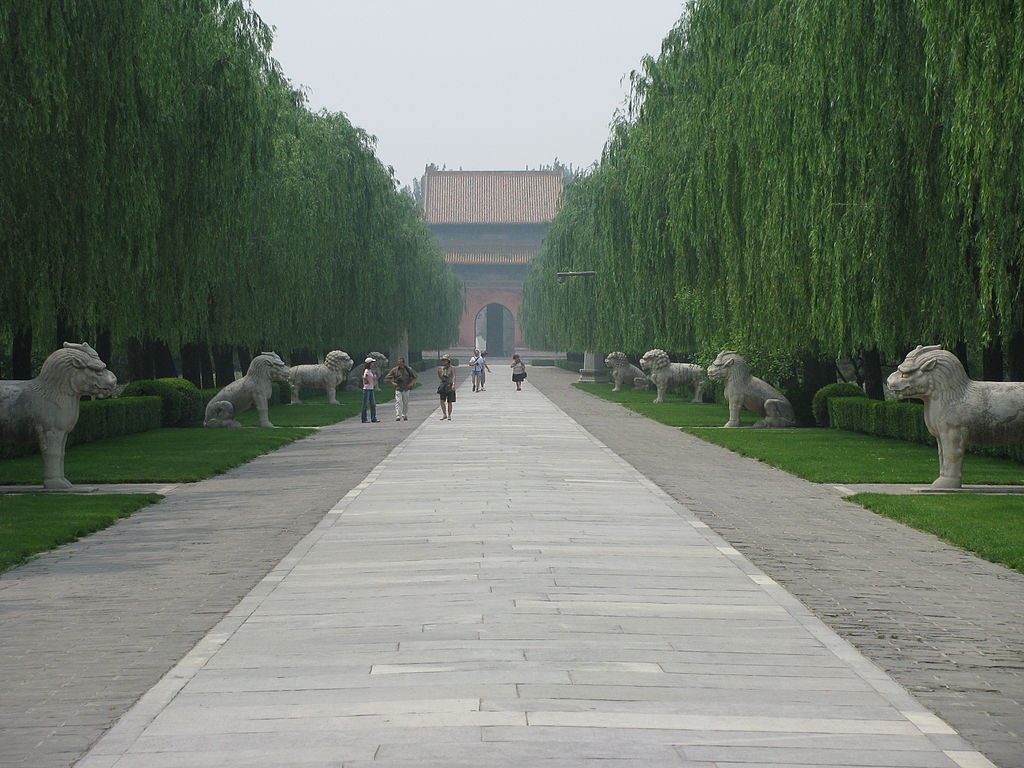 Getting to the Ming Tombs

Take subway Changping Line to Changping Dongguan station (昌平东关) from where you’ll need to take a bus or taxi. See here for a Beijing Subway Map

To visit the Stone Archway

From Changping Dongguan station (昌平东关) take bus 67 to 石牌坊 bus stop. After visiting the Stone Archway, catch bus 32 or 67 to the next stop Dagonmen bus stop 大宫门 which is the Great Palace Gate. From there you can walk to the Stele Pavilion, and continue walking along the Sacred Way, at the end of which is Changping Huzhuang stop (昌平胡庄) and you can catch the 314 bus to Changling stop (长陵) or Dingling stop (定陵).

To skip the Stone Archway

Take the bus 314 to  Dagongmen bus stop (大宫门) for the Great Palace Gate. From there you can walk to the Stele Pavilion, and continue walking along the Sacred Way, at the end of which is Changping Huzhuang stop (昌平胡庄) and you can catch the 314 bus to Changling stop (长陵) or Dingling stop (定陵).

It’s 2 km and about 30 min walk from the Great Palace Gate to the end of the Sacred Way and the bus stop.

To Skip the Sacred Way and go straight to the Tombs

A taxi from central Beijing to the Ming Tombs area ( 明十三陵) would take around 70 minutes in travel time and cost around 140 RMB. You could also negotiate with the driver as to how much to shuttle you around the different sections and return home.

Alternatively, you can go to Ming Tombs Station (十三陵景区) on the Changping Line and take a taxi from the subway station. Some people have reported lots of touts working here quoting high prices and even taking people to showrooms. You may be better to get off at the prior station being Changping (昌平) and get a real taxi as it’s on a main road.

Where to Stay in Beijing?

One of my top picks for places to stay is the Sofu Hotel, which has a small food street near its door, it’s four-star, and is a very short walk to Ping’anli Station which gives you access to Line 4 and 6. Another choice is the Novotel Xinqiao which is four star and very near Chongwenmen Station or the Ji Hotel at Xuanwumen Station. All three are super convenient for getting around the attractions of Beijing by subway.

See also, my hand-picked list of the top 15  spa hotels in Beijing.