I’d been working away in Shenzhen for a while now so it was time for a journey. But where too? I’d been to nearby Hong Kong, Macao and had a quick look at Guangzhou, so where to next? I wanted to find somewhere not to far away, reasonably simple to get to, and somewhere that had something special going for it.

A quick look at the Shenzhen train schedule showed me something interesting, the Shenzhen to Fuzhuo train stops at Yongding, and Yongding is where the very famous Tulou buildings are located. Yongding is also close to Xiamen, a place famous for its clean streets, beaches and it’s nearby island, Gulangyu. So, it’s a done deal, Im off to Yongding.

The train takes just over 7 hours to get to Yongding, and it’s another overnight train leaving from the Shenzhen Railway Station at Louhu at 9.30pm and arriving at Yongding at around 4.50am the next morning. The other overnight trains I’d been on while travelling China were ‘D’ series trains meaning they’re new, modern, luxurious and fast. This was a ‘K’ series train which is apparently next best, not quite as fast nor as luxurious.

The available seating options are similar to the D series train, with this particular K series train offering a seated option (no choice of hard or soft like other trains), a hard sleeper and soft sleeper option. The last two times I chose the soft sleeper option, which is a cabin with a closing door containing four bunk beds, a comfortable mattress, blanket, pillow, a personal TV and your own light. Unless your travelling in a group it can be a lucky dip as to who you’ll be sharing a cabin with but I haven’t had any complaints so far. 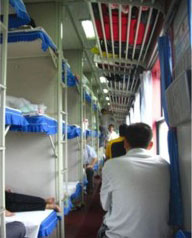 This time though I decided to try the hard sleeper option. All the bunk areas are open and there is three bunks attached to each wall, so the top bunk is up fairly high. You can choose which bunk you want when you buy the ticket, so I went with the top bunk, turned out to be good choice, the bunk is well above head height, so it has some privacy, and a greater chance of not being woken up by people moving down the passageway.

The hard sleeper bunks still have a comfortable mattress, clean sheet, blanket and pillow. There’s no personal reading light and the main lights go off before 11pm.

Is it safe? Even though I’m a foreigner who can hardly speak a word of mandarin, I’ve never been made to feel uncomfortable by Chinese people, in fact it’s usually the opposite with welcoming smiles and ‘ni hao’s’ (hello) and some looks of curious intrigue when I’ve ventured to places where foreigners are a rare sight. There’s no chance that I’d leave my bag containing my laptop, clothes etc on the luggage rack on a western train while I went to the dining car to get a drink, but I do so here. I should probably be more cautious, but in reality wheres this thief going to go and like everywhere in China there’s police on this train too.

As for actually sleeping on a train, I’m a light sleeper, so I keep waking up often, add to that a group of girls below that talked for the whole trip, seriously, one girl didn’t even take a breath in the whole seven hour or so journey. I could see it was annoying the guy across from me, he wanted to sleep too, but Chinese are sometimes far to polite and just endure things. It got the better of me, but I don’t know how to say ‘could you please keep it down’ in Chinese. Maybe they know english, ok, i’ll try, ‘will you f#@%ing shut up’ I joyfully hollar, nothing..they just kept rabbiting on, damn, they don’t speak english.

Regardless, I’m sure that the sleeper option is still more comfortable than the sitting in a hard or soft seat. Next time I’ll remember my earplugs.

When I first got on the train, staff came around and swapped my my paper train ticket for a plastic card, and my paper ticket was carefully stored into the sleeve of a black folder this train hostess carried with her. Later I realised why, the train staff actually keep track of your departing station and wake you 15 minutes prior to arrival then handing you back the original paper ticket. Cool service.

The hard sleeper option is also close to half the price of soft sleeper ticket at 166RMB to Yongding. I could have flown to nearby Xiamen for around 800RMB and then caught a bus to Yongding, but the train is so much cheaper and being overnight service it saves a nights accommodation too.

The train pulls in at Yongding Station, I jump off, I’m in rural China, it’s dark, I’ve had next to no sleep, I’ve booked nothing and the GPS maps on my phone isn’t working. The people who got off the train are quickly disappearing into the dark, they know where they’re going, I don’t.