With the introduction of Buddhism from India around the time of the Han Dynasty (206 BC – 220 AD), temples and monastic halls were built on what would become the four famous mountains of Chinese Buddhism.

The four famous mountains of Chinese Buddhism (中国佛教四大名山) are Wutai Mountain in Shanxi, Putuo Mountain in Zhejiang, Mount Emei in Sichuan, and Jiuhua Mountain in Anhui. They are the dojos of Manjushri, Guanyin Bodhisattva, Samantabhadra, and Bodhisattva. 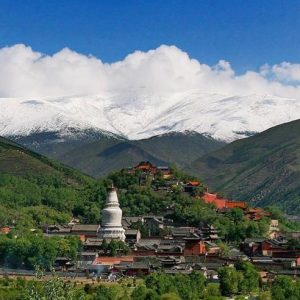 Province: Shanxi | Height: 3,058 metres (10,033 ft)
Mount Wutai, also known as Mount Qingliang, is located at the headwaters of the Qingshui in Shanxi Province, China. Its central area is surrounded by a cluster of flat-topped peaks roughly corresponding to the cardinal directions. The north peak (Beitai Ding or Yedou Feng) is the highest (3,061 m or 10,043 ft) and is also the highest point in northern China. Mount Wutai is home to many of China’s most important monasteries and temples including Xiantong Temple, Tayuan Temple, Shuxiang Temple, Longhu Temple, Bishan Temple, and Lingying Temple. 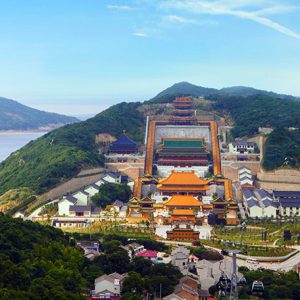 Province: Zhejiang | Height: 291.2 meters (954 ft)
Mount Putuo is an island southeast of Shanghai in Zhoushan, Zhejiang, China. It is the dojo for Guanyin Bodhisattva, and is also a famous island scenic tourist attraction. There are 20 or so preserved temples here with the most famed being Puji Temple which was built in Song Dynasty. Province: Sichuan | Height: 3,099 metres (10,167 ft)
Mount Emei is a mountain in Sichuan Province. Emei is the dojo of Samantabhadra. The mountain is laden with temples including Baoguo Temple, Fuhu Temple, Qingyin Pavilion, Hongyingping, Xianfeng Temple, Jinding Huazang Temple, Wannian Temple along with the key attraction being the Golden Summit at 3077 meters featuring temple and iconic statue overlooking the clouds below. 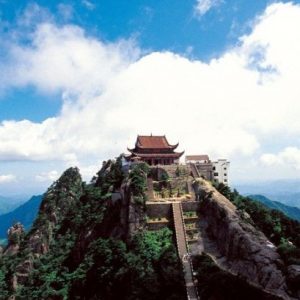 Province: Anhui | Height: 1342 metres (4402 ft)
Mount It is located in Qingyang County in Anhui province and is famous for its rich landscape and ancient temples. Jiuhuashan is said to be the dojo of the Tibetan King Bodhisattva (Ksitigarbha Bodhisattva or Dizang). The iconic temple here is Tiantai built atop of the peak of the same name. Other temples include Zhiyuan Temple, Huacheng Temple, Ganlu Temple, the Incarnation Grand Hall, Shangchan Hall, Longevity Palace, and Dongya Temple.

Fangjingshan of Tongren, Guizhou Province ranks just outside the four famous mountains but is nonetheless an important spiritual destination currently and historically. 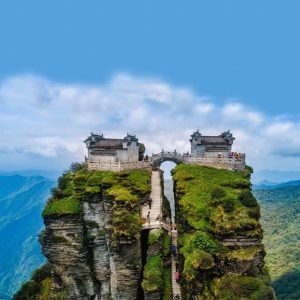 Province: Guizhou | Height: 2,570 m (8,430 ft)
Mount Fanjing, located in Tongren, Guizhou province, is the highest peak of the Wuling Mountains in southwestern China, at an elevation of 2,570 m (8,430 ft). The Fanjingshan National Nature Reserve was established in 1978 and designated a UNESCO Biosphere Reserve in 1986. Fanjingshan is a sacred mountain in Chinese Buddhism, considered to be the bodhimaṇḍa of the Maitreya Buddha. It became a UNESCO World Heritage Site in 2018 and was promoted to be a National AAAAA Grade Scenic Spot.