The Forbidden City was once the imperial palace of the Ming and Qing Dynasties and was originally constructed in the early 1400s. The city was once off-limits to the general public and home to 24 successive emperors. Now, it is one of the most popular tourist attractions in the world attracting over 7 million visitors a year.

Its official name has been changed to the Palace Museum, but most people still refer to it as the Forbidden City. The complete site occupies an area of over 720,000 square meters featuring nearly 10,000 buildings. It is also the largest collection of ancient buildings in China and also the best preserved.

The Forbidden City also features a moat around its outer walled perimeter and internally is divided into two parts, being an outer court (for ceremonies) and an inner court where the emperor would live and handle state affairs.

It’s easy to see the lavish opulence that the residing Chinese emperor of the time would have enjoyed. Apparently many emperors chose never to leave the palace and it’s easy to see why as this place is immense. There are special buildings and areas for nearly every activity the emperor undertook, and some buildings just to cater for the differing moods of the emperor!

I spent more than 4 hours just wandering around all the hallways, pathways, rooms, halls, open squares and garden areas, and still, there was so much more to see. It would be no problem to spend a whole day here and even come back again if you were really interested in ancient Chinese history and culture.

I wandered around this place on my own rather than being stuck in a tour group, but here’s a handy trick, there is plenty of tour groups moving around the place with English speaking guides. So, when you want to know more about something, just move in on the group as the tour guide is spieling out an explanation. There’s also a map available at the ticket office which features a small write up on the important sections, and you can also hire audiobooks to walk around and listen to while in the city.

It’s well worth getting there before the gates and ticket office open at 8.30 am, as the tour groups pour into this place and the line up I saw later in the day looked like no fun at all!

Why was it called the Forbidden City?
It’s original name in Chinese, Zi Jin Cheng, which translates to Zi meaning purple, Ji meaning forbidden, and Cheng meaning city. Being an imperial palace up until 1925 ordinary people were not allowed. During that time it was exclusively for the emperor, his family, servants, government officials and visiting dignitaries with much of the grounds being exclusively for the emperor.

How and where to buy tickets for the Forbidden City

As of late 2017, all tickets are sold online via the official website: http://gugong.228.com.cn

Unfortunately, it’s not available in English and even if you use Google Translate to navigate the site, payment is required by local bank card or Alipay (China’s equivalent to Paypal).

Don’t fret, tickets are still easy to get for foreigner visitors.

At Meridian Gate, there is a Comprehensive Service Window (综合服务窗口) to the left of the main entrance where they check tickets for entering, and they will help you get tickets. It’s fast and easy.

You must show ID, so be sure to take your passport.

Also, see the official website of the Palace Museum at dpm.org.cn which features info on upcoming exhibitions and section closures.

Ticketed Galleries inside the Palace Museum

If you wish to visit these, and it’s recommended, you need to pay for entry

Food and Beverage inside the Forbidden City

There are 8 cafe/kiosks inside. The small food court near the Hall of Mental Cultivation has a sitdown area. Outside the Gate of Heavenly Purity, there is the old Starbucks that still serves coffee and similar light foods. It can get expensive compared to street prices so you may like to take your own water and snacks.

Taxi: Show the driver this 故宫 and he/she will look after the rest and drop you within a short walk to Tiananmen Gate.

Once you get to Tiananmen Gate, walk through, and continue along past Zhongshan Park on your left until you reach the ticket office at the Meridian Gate.

It’s confusing at first as the streets are fenced off. Look for a large sign that has tips on getting to a series of onward destinations. Basically for everything you simply head in a westerly direction. After walking 20 meters to the west you’ll find an underpass and head to Jingshan Park, there are also bus stops here. Alternatively, ignore the underpass and keep walking to the bus stop where you can catch the trolley bus 103 to Wangfujing St, or bus 814 and head to the Temple of Heaven, or hail a taxi, or keep walking westward for 800m and you’ll find Beihai Park. 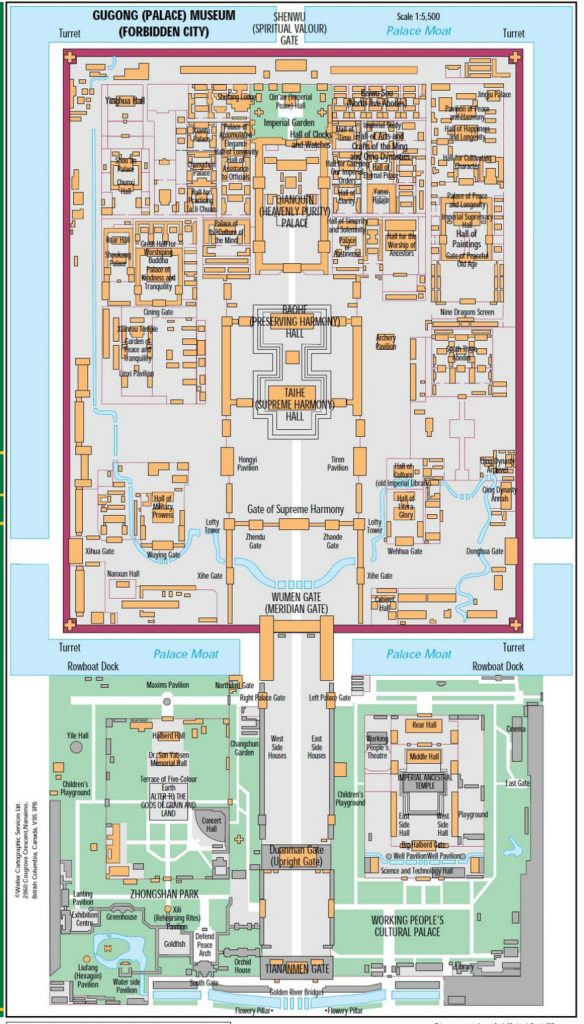 The key to getting the most out of your time at the Palace Museum is not getting lost, and doubling back over covered ground, and wearing yourself out. Here are incredibly useful maps of the Palace Museum with suggested tour routes and the must-see highlights.

The One Day Forbidden City Full Tour Plan and Map 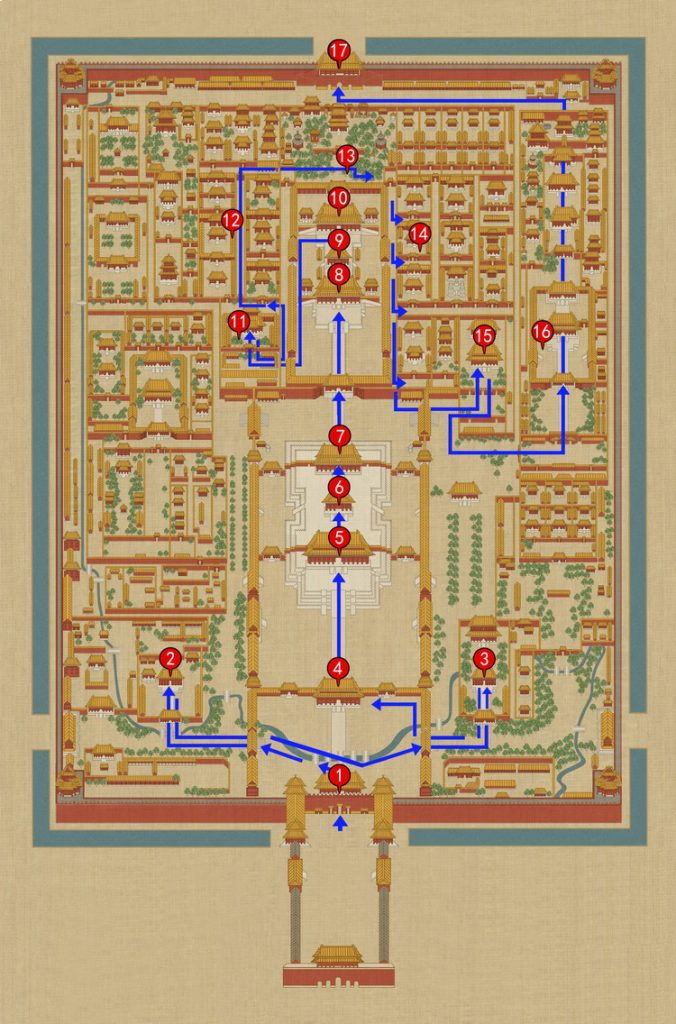 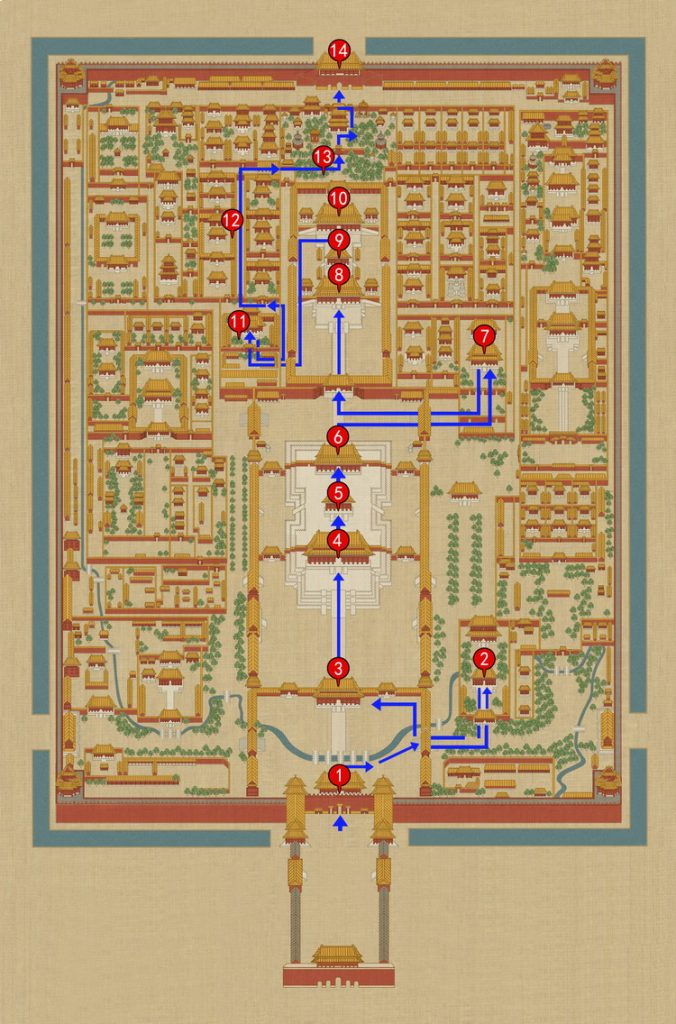 Top Places to stay near the Forbidden City

Including my picks for the top-rated and most convenient places to stay near the Palace Museum.

Also, see my hand-picked list of the top 15  spa hotels in Beijing

I’ll include some fast facts here and if you’d like to dive deeper into the history and workings of the palace I’ll suggest this 12-Part Series: The Forbidden City- CCTV-9 Documentary Channel.

Also, see my overview and guide to visiting the Ming Tombs at Beijing