Wuyue (五岳) is the general name of the five famous mountains in Chinese Han culture and is the product of the combination of ancient folk mountain god reverence, the concept of the Five Elements and imperial excursions and meditation in ancient times.

The “Five Sacred Mountains” (or Wuyue  – 五岳), also referred to as the Five Great Mountains, began with Emperor Wu of the Han Dynasty (157 BC – 87 BC). “Yue” in Wuyue means high mountains. During the Wei, Jin and Southern and Northern Dynasties, Buddhism and Taoism began to build temples and carry out religious activities on the Five Sacred Mountains.

Emperors of ancient China would perform excursions to the mountain peaks and offer non-human sacrifices on a regular basis. This tradition became a ritual of the state according to Confucianism and was one of the must-do activities upon becoming emperor. This tradition continued right up until the fall of the last dynasty in 1911.

While the Five Great mountains are not denoted as sacred mountains of either Buddhism or Taoism, they do have a strong Taoist presence and many Buddhist temples.

The Five Great Mountains remain places of pilgrimage to this day with many young people having the goal of climbing all five and retracing the footsteps of the ancient emperors during Imperial China. The mountains are popular tourist attractions and are well developed featuring good tourist and transport services and several are national AAAAA rated scenic sites.

The Five Great Mountains are 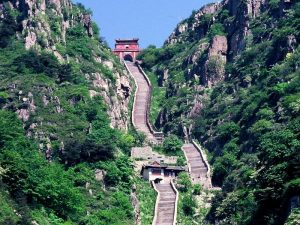 Province: Shandong | Height: 1,533 metres (5,030 ft)
Mount Tai, or Taishan, is a mountain of historical and cultural significance located north of the city of Tai’an, in Shandong province, China. Mount Tai has been a place of worship for at least 3,000 years and is a National AAAAA level tourist attraction. 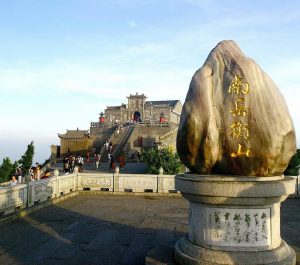 Province: Hunan | Height: 1,300 metres (4,265 ft)
Hengshan, is a mountain in southcentral China’s Hunan Province known as the southern mountain of the Five Great Mountains of China. Heng Shan is a mountain range 150 kilometres (93 mi) long with 72 peaks. The Huiyan Peak is the south end of the peaks, Yuelu Mountain in Changsha City is the north end, and the Zhurong Peak is the highest at 1,300 metres (4,300 ft) above sea level. At the foot of the mountain stands the largest temple in southern China, the Grand Temple of Mount Heng (Nanyue Damiao), which is the largest group of ancient buildings in Hunan Province. 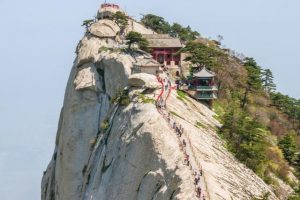 Province: Shaanxi | Height: 2,160 metres (7,087 ft)
Mount Hua, or Huashan, is located near the city of Huayin in Shaanxi province, about 120 kilometres (75 mi) east of Xi’an. It is the western mountain of the Five Great Mountains of China, and has a long history of religious significance. It is a National AAAAA level scenic spot featuring skywalk, temples, stone formations, caves, waterfall etc. 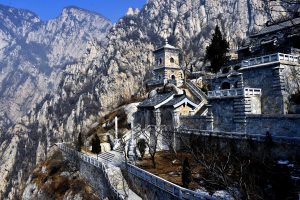 Province: Henan | Height: 1,500 metres (4,921 ft)
Mount Song, or Songshan, is a mountain in central China’s Henan Province, along the southern bank of the Yellow River, that is known as the central mountain of the Five Great Mountains of China. It is a National AAAAA level tourist attraction and world heritage listed site. It is noted for its rich cultural heritage as the birthplace of Zen, the Taoist holy land, and the origin of kung fu.