So I’m told if your after electronics or digital products there’s no better place to buy than in Shenzhen, China. This is backed up by the large number of electronics factories in the city, many global brand name products like the Apple iPhone and iPad are copied, I mean made, right here in Shenzhen too.

There are many electronics markets in the city too, but lucky me, Susan being a local took me to the number one  place to go electronics shopping in Shenzhen, if not the whole of China.  It’s the Huaqiangbei electronics market area  ( I think they call it Huaqiangbei Commercial Area) and it’s mind bogglingly big, apparently many gadget lovers and techies have entered this area and never been seen again! Just one of the multi-level electronics mega-stores is enough to blow your mind, but the fact that there’s numerous of them sprawling for block after block is just amazing.

Each floor of these buildings is packed with hundreds of independant retailers operating out of small stalls, and they’re all competing against each other! 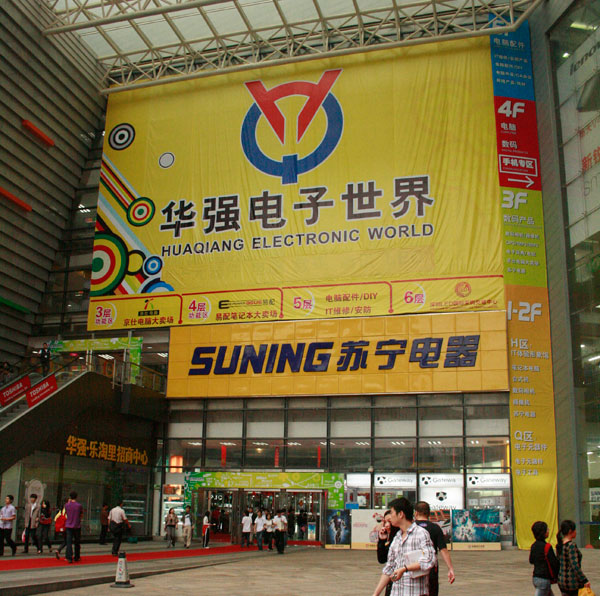 If your not happy with the five massive floors of electronics in that building you can go to this one: 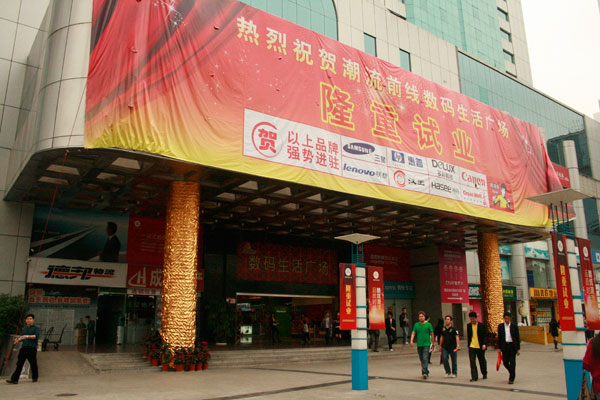 Still want more? Just walk around the corner to this one: 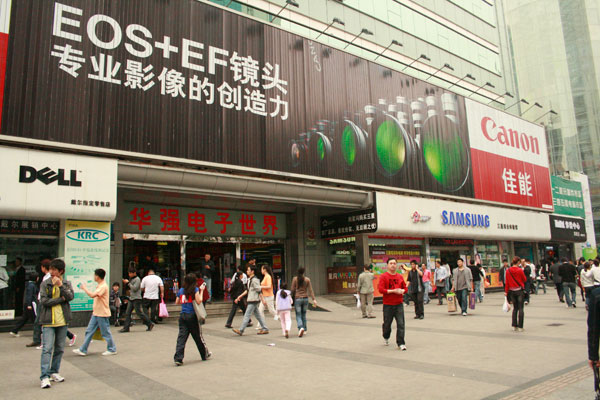 And there’s more if that’s not enough!

You can find everything in this area of Shenzhen including mobile phones, cameras, gadgets, laptops, pc’s, lcd’s, cables, accessories, batteries from brand names like Canon, Sony, Dell, Apple, Asus etc etc. You can also find OEM goods and there’s also plenty of brand name copies if you want to take a punt on quality. 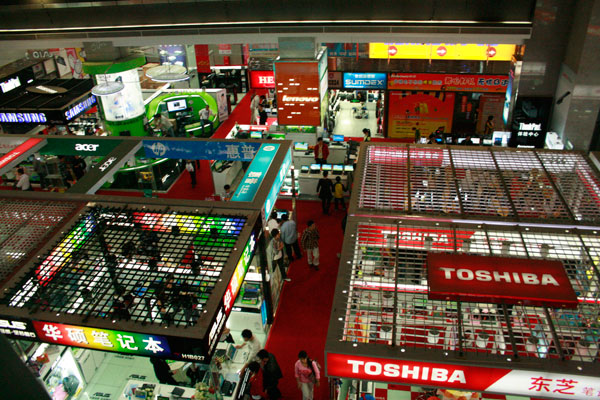 Interestingly one multi level building is dedicated to small components like resistors, leds, plugs and all sorts of electrical and electronic fittings. There’s also whole floors of people selling second hand and recycled goods. If you need your mobile phone, camera or any electronics fixed, it looks like a great place for that too. 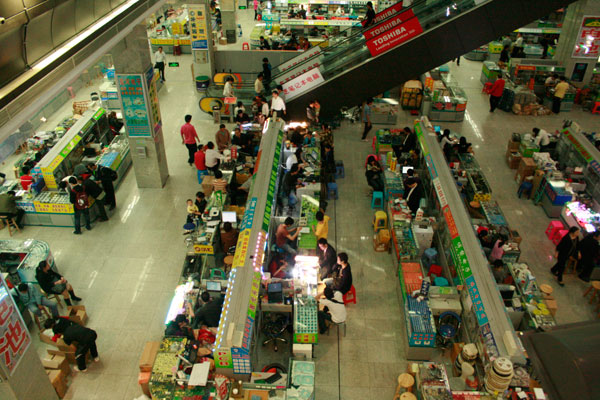 Believe it or not, I escaped here without buying a thing! I think I was too awestruck! But I’ve got the feeling I’ll be back….

Further along Huaqiang North Road, there’s a Maoye Department Store which has fashion, beauty and home products. There’s also another large department store/market featuring just womens fashion and is appropriately named Womens World, and further along is another Womens World mall, and also a shopping mall just for childrens clothes, toys and the like. Yes, it’s called Childrens World.

Behind SEG, as mentioned, theres also a couple of buildings with stalls selling selling home security products and some selling no-name laptops.

There’s also a couple of multi-level buildings dedicated to mobile phones, including copies and originals! If your paying a lot, make sure it’s the real thing, but it probably won’t be!

How to get there: take the metro to Huaqiang Lu and walk out Exit A, theres also loads of shops selling clothes and curios inside that metro station.

Update: for some more detailed and upto date info check out the Huaqiangbei post at Shenzhen Shopper.

Here’s a rough hand drawn map outlining the major stores along Huaqiang North Rd (Huaqiangbei), could be a time saver to help get your bearings on a first visit. For more maps visit the Shenzhen Maps site.

Map including location of hotels near and on Huaqiang Bei Lu.

Huaqiang Plaza Hotel – has a fantastic location, right in the heart of Huaqiang electronics market area. It’s clean and modern, has a reasonably priced buffet restaurant and a Starbucks on the ground floor.