Here is another one of those traditional Chinese shopping districts that I’ve come to admire, they span for block after block, most of them have been operating for centuries, they’re vibrant, teaming with life, and they’re packed with keen sellers waiting to do deals. These traditional marketplaces have soul, and character that the modern shopping complexes just don’t have. And the Dongmen, aka Laojie, market area of Shenzhen is no different. 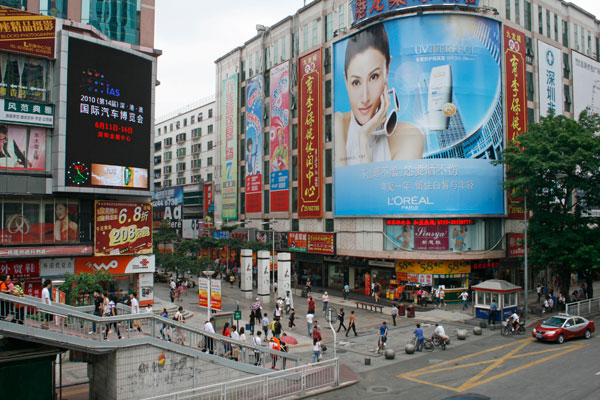 On my first visit I was looking for ‘Dongmen Pedestrian Street’, expecting a casual automobile-less street with some shops, but what I found was more like a ‘shopping suburb’ spanning several blocks including countless brand name shops, several multi-level malls, several multi-level markets, food streets, public spaces, ad-hoc stalls set up in alleyways and in every nook and cranny possible. Such is the expanse of this shopping district it needs three KFC’s!

Apparently, this area has been ticking away for over 300 years and has long been one of Shenzhen’s most popular places for shopping. Like most things in China, it’s got several English aliases including Dongmen Pedestrian Street, Dongmen Walking Street, Laojie (which means ‘old town’), Dongmen Market and East Gate which is actually what the word Dongmen means. 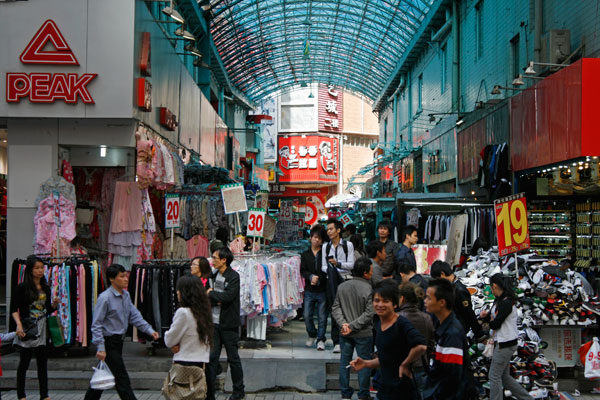 As for shopping, the market stalls are overflowing with men’s and women’s clothes, shoes, jewllery, handbags, travel bags, and suitcases. The traditional market stalls can be found down alleyways and inside the several multi-level ‘wholesale’ malls. There’s also a multi-level mall, or department store if you like, that’s dedicated to just shoes, one just for comic books and there’s the multi-level Hongkai Craft City amongst others. Plus, there are the typical modern multi-level malls, like Sun Plaza, that feature many of the popular chain stores, a supermarket, etc etc 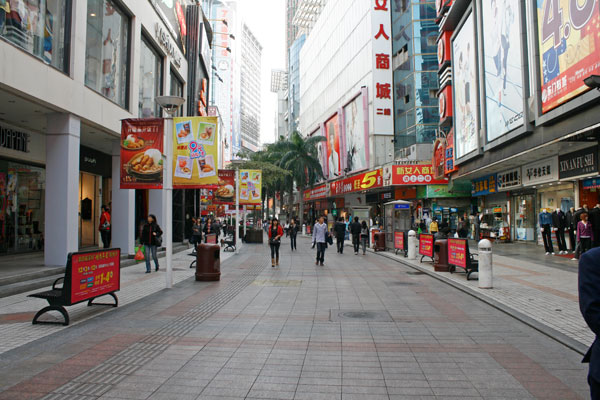 Stuff at Dongmen is cheap, at the market stalls you’ll need to check the quality, but you can bargain your way to extremely cheap deals if find something you like. Inside the more upmarket multi-level malls, and the retail chain stores, it’s prices as marked but quite often they have sales offering substantial discounts. 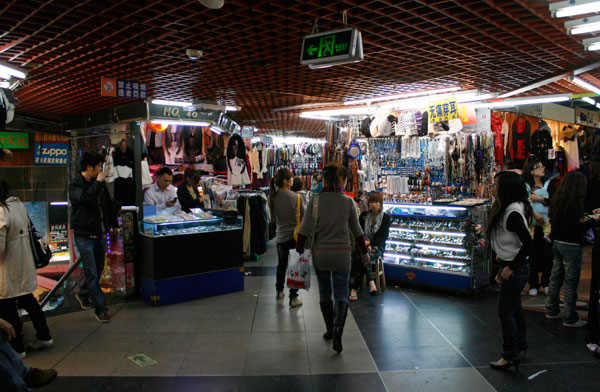 As for food, there’s plenty of choices including KFC, McDonald’s, Pizza Hut, Saizeriya (pizza+pasta similar to Pizza Hut), Starbucks and there’s plenty of traditional food stalls, local restaurants and even dim sum at the Magic Dim Sum Restaurant. There’s also the Modern Toilet Restaurant if you like sitting on the can while eating dinner.

Unless you like a crowd, it’s best to visit on weekdays, public holidays are absolute chaos (in a harmonious style), just like below. 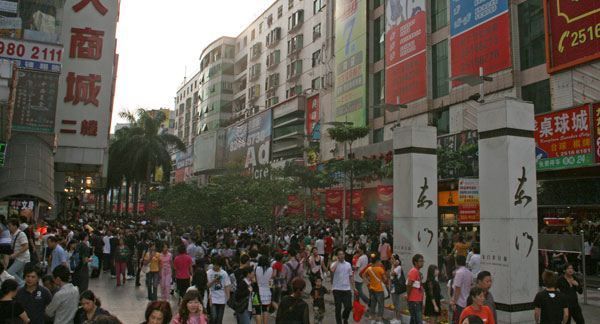 Getting There: take the Metro (subway) and get off at Laojie station and walk out exit A. For taxi here is the address in Chinese: 深圳市东门步行街

Dongmen Pedestrian Street area on the map, with my picks for the top 5 places to stay