If you are looking for a getaway from the hustle of Shenzhen or Guangzhou, like I was, you might want to check out Qingyuan. It’s a city packed with hot springs, eco theme parks and natural attractions. Fast trains from Shenzhen or Guangzhou make it a quick journey, from Shenzhen North Station it takes around 1 hour and from Guangzhou North about 15 minutes and Guangzhou South about 30 minutes. There are trains from GZ that go to Yingde Station which is useful if you are going to the Baojing Palace (a special cave).

Qingyuan Station is about 15 km from the city center which is about a 40 RMB taxi fare. On the way in you’ll go past open fields and also see that what was perhaps a an older city is now well into a growth spurt with new hi-rises easily seen on your way around, perhaps spurred on by the arrival of the fast train. The city itself isn’t that big, but the district is quite large and there’s plenty of things to do and see. If your looking for a quick nature hit and some fresh air then your probably going to like this place. It’s fairly laid back and likewise the people seem fairly easy going.

I chose to stay in the city center at the Hubin Bubugao, which turned out to be clean and quite. It’s also home to a quite popular Dian Xin (dim sum or yum cha depending where you are from) restaurant, which serves the amazingly pleasing Guangdong specialty all day. Nearby the hotel, there’s more hotels, like the Ge Hao Holiday Hotel and the Tianhu hotel, behind you will find a beautiful park, namely Zhongshan park. Down Xianfeng Road in one direction you’ll find the RT-Mart and shopping center, in the other direction you’ll find a couple of blocks of shops including a couple of small malls, shops lining the streets selling phones and snacks plus some names you’ll know including KFC, Pizza Hut and Watsons.

Time for attractions and there’s several, Qingyuan is one of those places where it’s better fun if there’s more than one, for example the hot springs, rafting and eco parks are all best for 2 or more. Not to say the lone traveler cant get some value, there’s plenty of natural attractions to check out and explore. You can get around the city by public bus or via taxi both of which are quite reasonably priced. 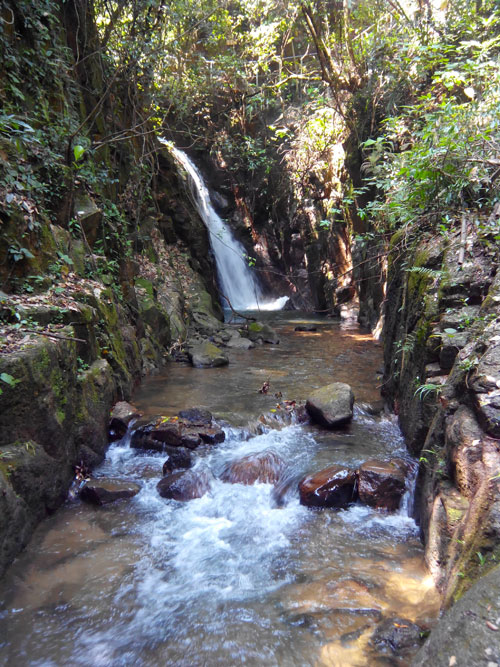 The scenery at Tianzi Mountain Waterfall Scenic area is worth checking out, It’s about 100RMB in a taxi to get there but only 7RMB on the public bus, number 206 takes you to Gaoting, I was lucky and someone showed me the right stop to get off at, from there take a 5 minute and 20RMB bike ride on the back of bike and you’ll get to the falls. There by no means spectacular, but when you’ve had your head up Shenzhen and Guangzhou’s tailpipe for several months you’ll find it’s quite refreshing, particularly if you go during working hours and there’ll be hardly anyone there. Make sure you buy some tofu from the stand at the entry gate before you go in, it’s delicious.

On this same road, but I didn’t work this out until the next day, there is Jin Ji Yan or Golden Chicken Rock, a small mountain with a shape resembling a chicken, but that’s not the interesting part, what’s interesting is the cave and small temples. 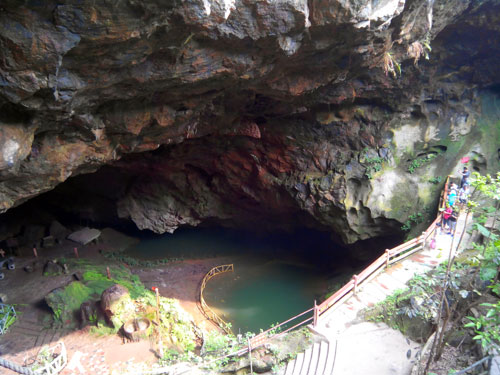 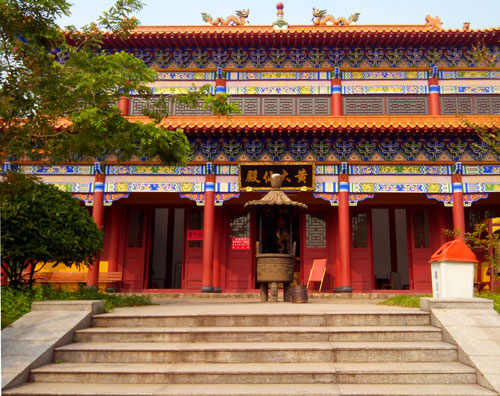 Something not to miss is a local specialty which is Qingyuan Chicken, such a lucky day to find something so special! Apparently it’s the chicken itself that is special, the cooking process is simple enough, it’s boiled. When served it’s chopped into little pieces and mixed with ginger, oil, coriander, spring onions and a bunch of salt. Tasty! Roaming around the city you’ll find a mix of old and new, there’s new areas being developed and hi-rises are going up fast, Qingyuan like many other cities is going through the process of modernization. Photo below is the old city center. 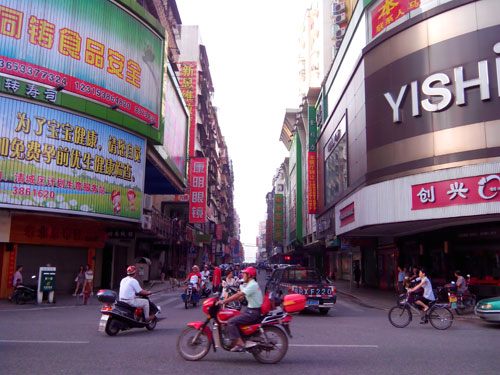 What I really came to see were the temples, Fei Lai Temple. Interestingly you can only get to it by boat. What I could gather on my first attempt to find my way to the boat was that there was no boat, it only goes on weekends. On the second attempt I was told that it’s crazy expensive. Third attempt to find my way I was told that I was crazy to go on my own. A little burnt out by the hot weather, walking and so on, I choose the latter advice and will return another day. (Which turned out to be pretty simple, and worthy of the fuss)

Outside of Qingyuan City:

Map featuring the top 5 places to stay in Qingyaun + attractions 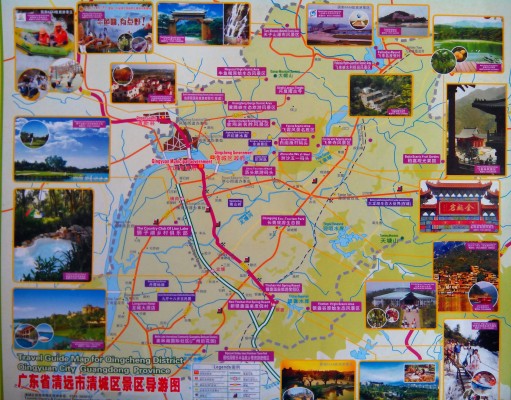 Highlights of this visit were:

Fei Lai 飞来 (bus 207 to Baimiao Fishing Village) which I am pleased to tell many people, who might balk at the cost of the boat, that you can walk there. See all the pics here

太和洞 Qingyuan Ancient Taihe Cave (bus 2 from the main bus station) – I will never forget swimming in amazing rock pools after the walk to the temple at the top of the mountain. The temple is not big, but worth the healthy walk up the steps to the top enjoying the amazing views along the way.

Again, I stayed at the Hubin Bubugao, its price is reasonable and it’s clean and comfortable. It’s probably starting to get dated now, and I think next time I’d try the new Hampton by Hilton for an affordable splurge.

After Qingyuan I took the train to Shaoguan

Update: I liked it so much that I stayed! More about Qingyuan

Qingyuan now has a very cool glass bridge attraction. Huangtengxia tourist attraction (清远黄腾峡生态旅游区) a natural scenic area and popular site for rafting/drifting now features Huangtengxia Tianmen Sky Walk which stands at 500m tall and extends out from the cliff face some 360m. Just to one-up all the other glass bridges, it also has 2000 lights to put on a spectacle at night and 450 water jets around its circular glass centerpiece to add another level of enchantment. 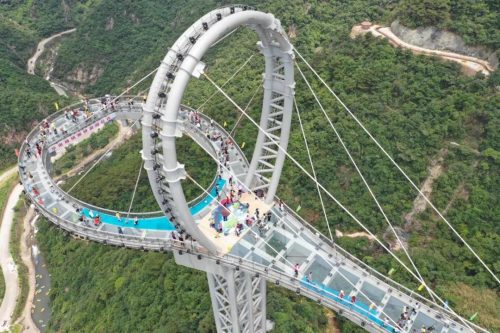