Politics in China is a mystery to anyone outside of the nation and not many will move beyond the label of “authoritarian”, and perhaps a few other names, so today, let’s take a bit of deeper dive into the core element of China’s political system which is the Communist Party of China (CPC) – 中国共产党  which can also be referred to as the Chinese Communist Party (CCP).

Note, I will try to make this as brief and as easily digestible as I can from an objective viewpoint.

Firstly it’s worth noting that the CPC is not the only political party in China. Other parties include

Although, as per the constitution, the CPC is the only party that can rule China. More about the governance of China in a post to follow.

The Communist Party of China was established in 1921 post the May Fourth Movement that saw the spread of Marxist ideology in China. Its founders were Chen Duxiu and Li Dazhao with support from the Soviet Russian government.
The May Fourth Movement (May 4, 1919) was a protest by over 3000 students was a rejection of tradition, a rejection of imperialism that had ruled China for so long, a rejection of traditional values, and mostly a rejection of the Treaty of Versailles which saw Shandong being handed to Japan.
That rejection led to the search for new beliefs, and a vacuum that was filled by news of the October Revolution in Russia. Marxism and Leninism became hot topics.
China had just entered an incredibly turbulent time, a time of warlords struggling for power under the early republic days post the fall of the Qing Empire. That struggle for the government to gain military control, reunite the nation and transit into a democracy, post the death of Sun Yat Sen, morphed into a civil war against the Soviet-backed Chinese Communists.
Long story short, Mao Zedong rose and led the Communist Party to victory in a civil war and the People’s Republic of China was founded by the Chinese Communist Party in 1949.
Today’s Chinese Communist Party (CCP) has over has over 4 million branches and 87 million members which accounts for some 6% of the population of the country.

China can be quite a confusing and seemingly contradictory place to the external observer, whilst claiming to be communist and uphold the merits of socialism, it is clearly apparent that capitalism has led to its greatest success.
The failure and high toll of the Cultural Revolution and the Great Leap Forward of the Mao era are well documented, and under the leadership of Deng Xiaoping, China began its economic transformation. The concept of a centrally planned economy was dumped in favor of a newly coined definition of capitalism being Socialist Market Economy while retaining a Leninist style of governance.
From that time on it could be seen that party beliefs moved away from fixed rigid ideological pursuit and cult personalities.
Today, the party states its central belief system as

The realization of communism is the highest ideal and ultimate goal of the Party.
The Communist Party of China uses Marxism-Leninism, Mao Zedong Thought, Deng Xiaoping Theory, the Theory of Three Represents, the Scientific Outlook on Development, and Xi Jinping Thought on Socialism with Chinese Characteristics for a New Era as its guides to action.

The Four Cardinal Principles—to keep to the path of socialism, to uphold the people’s democratic dictatorship, to uphold the leadership of the Communist Party of China, and to uphold Marxism-Leninism and Mao Zedong Thought—form the foundation for building the country. Throughout the whole course of socialist modernization, the Party must adhere to the Four Cardinal Principles and oppose bourgeois liberalization.

Becoming a member of the CCP

Becoming a member of the CCP begins early with the Young Pioneers of China educating children from the ages of 6 to 14 in the virtues of communism and instilling allegiance to communism under its motto of “To fight for the cause of communism: Be ready!-Always Ready!” “为共产主义事业而奋斗——时刻准备着”. It’s compulsory for all students in that age group to be a member of YP although, to be honest, my impression seems to be that some schools may be more enthusiastic about it than others.
During those formative years the CCP narrative, its version of modern history, and nationalism, is forefront under the three tiers of Party, Nation, and People which is closely followed by the four “isms”: patriotism, collectivism, socialism, and communism, and further backed by the five loves: love of the nation, its people, of science, labor, and public property.
Post YP at age 14 the Communist Youth League of China (中国共产主义青年团) is open to new cadres. Entry is not mandatory, much the opposite, as candidates are selected to become cadres. Currently, there are over 85 million members in CYL. Primarily, its objective is to identify talent and to cultivate new leaders. It has been described as a finishing school for China’s elite and has produced many of the nations past leaders such as former President Hu Jintao, current Premier Li Keqiang, former Vice President Li Yuanchao and former aide Ling Jihua. It has been a strong faction within Chinese politics and under the era of President Xi is currently moving through a process of reform.
Post the CYL, it’s time to join the CPC (Chinese Communist Party). But that ain’t so easy. There are many who desire to join the party for personal gain such as a government job for life, for smoothing the way through business life and climbing the corporate ladder, and other benefits that being a party member brings, and there are those who join out of a deep belief in what the party represents.
As per the party’s constitution “Members of the Communist Party of China are vanguard fighters of the Chinese working class imbued with communist consciousness.”
Joining the party can take years, a process of applying while at the student level where 3 out of 100 from each school may be selected. That process consists of writing a thesis on society, submitted over time, attending ideological training, and sitting exams, all the while your actions in daily life are observed.
Other pathways include military service (helps increase the chance of being selected), being the family member of a powerful party member, and financial gifts.

What are the strategic objectives of the Party?

The centenary of the People’s Republic of China is a big milestone. And it is core to the party’s current strategic goals. Knowing that its survival is only mandated the people currently due to economic success future goals by this time are stated as raising the per capita GDP to the level of moderately developed countries and to realize the nation’s modernisation.

Other notable goals are deeper integration of the party into society as per President Xi Jinping’s statement “Government, the military, society and schools, north, south, east and west – the party leads them all”. Establishing a National Supervision Commission in tandem with the Central Commission for Discipline Inspection that will oversee all public institution workers.

More about national goals in a coming post on governance.

How is the Chinese Communist Party Structured? 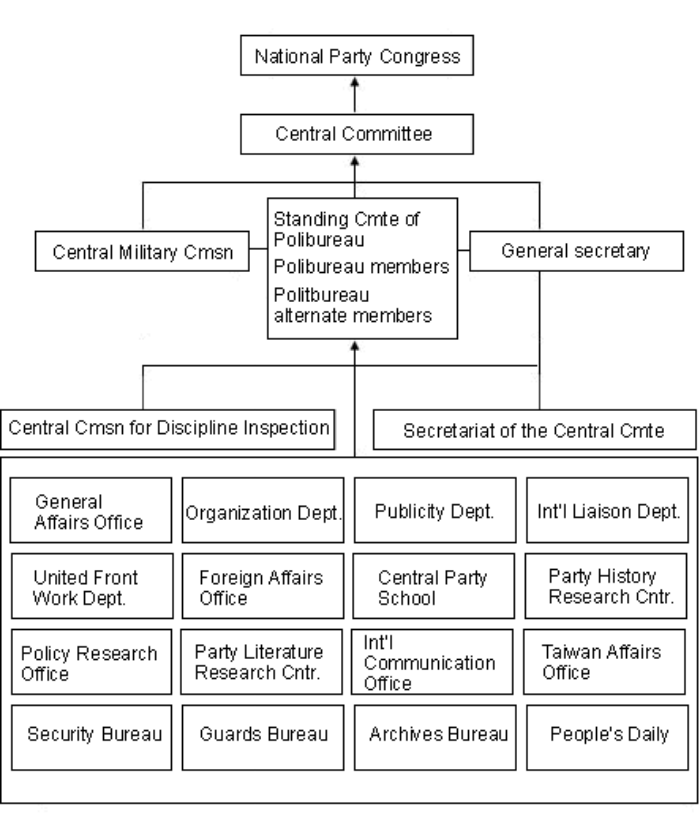 It’s the pivotal meeting of members which is held every five years. It is the CPC’s organ of supreme power as it here that the next leaders are chosen to be the members of the Central Committee.

The General Secretary is also the President of the country and the leader of the Central Military Commission.

The top leadership of the Communist Party of China and is headed by the General Secretary. Currently, it has seven members. Its officially mandated purpose is to conduct policy discussions and make decisions on major issues when the Politburo is not in session.

The Secretariat of the Central Committee

A body currently comprising of seven members who serve the Politburo and its Standing Committee. The Secretariat carries out routine operations of the Politburo and tasks as set out by the Politburo. Considered to be some of the most important political positions in the Communist Party

The Central Commission for Discipline Inspection

Tasked with maintaining the CPC’s constitution and examine the effectiveness of the party in its activities. It reports to the Central Committee.

Grassroots organizations of the Party are set up in enterprises, rural villages, organizations, schools, research institutes, neighborhoods, the People’s Liberation Army companies and other basic units.

What are the official media outlets of the Communist Party of China (CPC)?

The People’s Daily 人民日报 is the official paper of the CPC.

The United Work Front has its own news portal http://www.zytzb.gov.cn/tzb2010/index.shtml

The International Department of the CPC also has its own news portal http://www.idcpc.org.cn/jwdt/

The Organization Department has its own news portal http://news.12371.cn/dzybmbdj/zzb/gzdt/

The Central Commission for Discipline Inspection has its own news portal http://www.ccdi.gov.cn/