Yongding is a rural county within Chinas Fujian Province, the city of Yongding itself is small, minute by Chinese terms in that it probably has a population of less than 10,000, but I’m only guessing.  This is the place where I to go on and see the famous tulou buildings.

Once again my efforts in foward planning had rewarded me, here I was, I’d just stepped off a train at a small country town somewhere in China with no idea where to go or what to do next.

Fortunately this China, and here opportunities are never wasted. When I walk out the station exit there’s a lady with a handful of brochures and spotting me she immediately shoves one into my hand. It’s in Chinese but it’s got pictures of tuluos, things are looking up. She starts yelling out and waiving to another man who quickly comes over and points to the picture of one of the tuluos and says ‘this is my hotel’. Cool.

Turns out this guy speaks great english and after a bit more chatting it turns out he’s running a full day tour of all the tuluos in the area at 10.30. He’s got a deal. Minutes later I’m in some other guys van and on my way to a tuluo hotel.

We wound around a few of the streets of Yongding, which made me feel good to be in this van, theres not much going for Yongding by the look of it, not at that time anyway. This driver didn’t speak english, and after heading further into rural China I start to wonder…where are we going? Who cares, the countryside is beautiful, as the sun rises I could see misty clouds rolling over the many mountain ranges into the lush green valleys below.

After a drive of 40 minutes or so, and dropping a few drop offs of what must have been locals getting a ride home, we pulled up beside an old stone bridge and a beautiful river that was lined with a handful of ancient buildings. Wow. 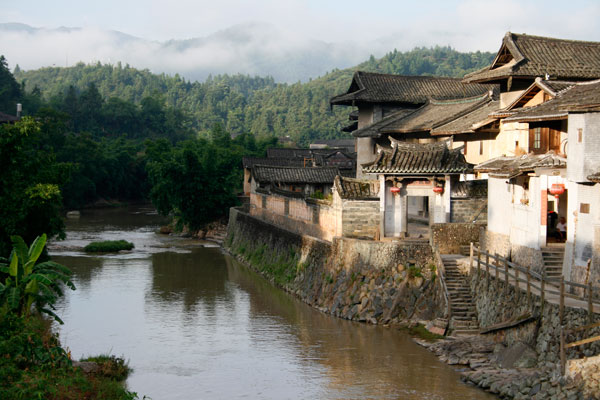 On the other side of the river I lay my eyes for the first time on a one of these famous round tuluo built by the Hakka people so many hundreds of years ago. The driver leads me down along the stream and into an wonderfully old building of traditional architecture, to be greeted by friendly young guy speaking english.

Turns out, I’m in Hukeng, this is the hotel (called the Fuyulou Changdi), this friendly young guy is the actual owner, he speaks great english, it’s less than 100RMB to stay the night, it’s a wondrously beautiful building that’s over 800 years old, and I can join another two people heading off in a private car for day tour of the tulous. I couldn’t have organised things this well.

It’s still early in the morning so I decide to settle into the room and grab an hour or so rest before the tour begins.