Dazu Rock Carvings is one of the largest grottos in the world and is also UNESCO World Heritage Listed. Located in the Dazu District of Chongqing City, it has its beginnings in the Tang Dynasty, with development continuing through the Five Dynasties period and Song dynasties. 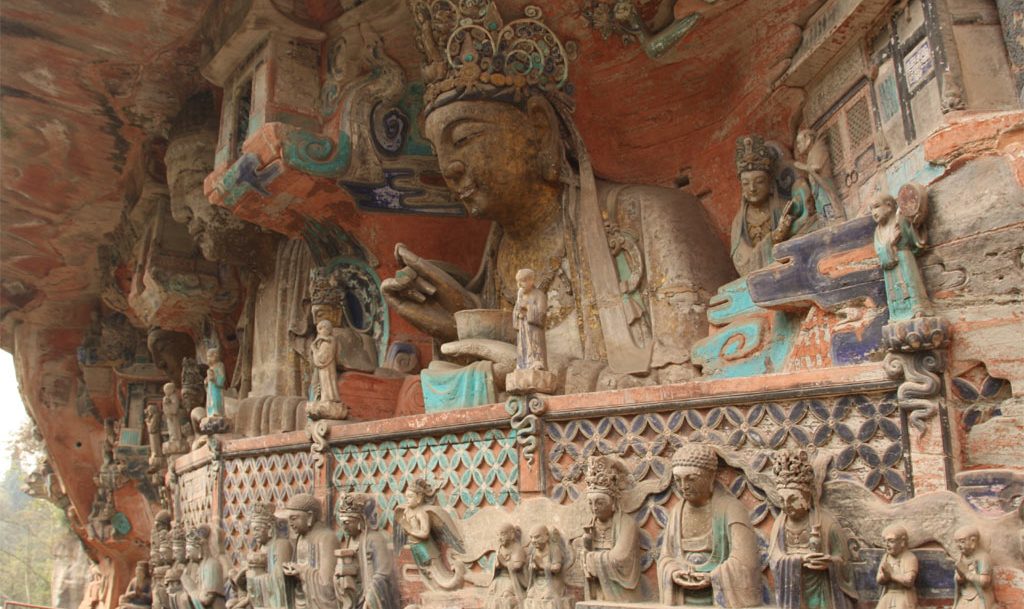 The historic sites are distributed in the southwest, northwest, and northeast of the county, a total of 23 sections. Baoding Mountain, or Baodingshan, has the largest scale and the most beautiful statues. In addition to Buddha statues and Taoist statues, there are also statues of Confucianism although Buddhist statues account for the largest proportion overall. 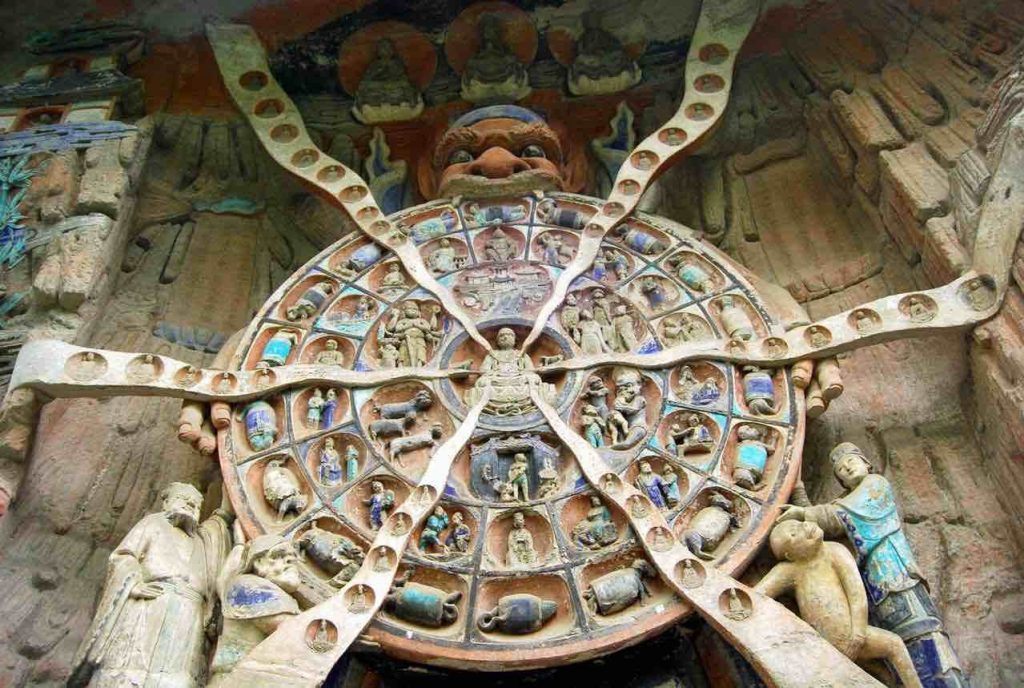 Dazu Rock Carving represents the highest level of grotto art in the 9th-13th centuries and is the last monument in the history of human grotto art. It shows the major developments and changes of Chinese grotto art styles in the Tang and Song Dynasties from different aspects and is irreplaceable for its historical and artistic value. It is 15 kilometers northeast of Longgang Street in Dazu District. The famous monk Zhao Zhifeng (1174 to 1252) built the cave temple here during the Southern Song Dynasty and it took more than 70 years to complete. Baoding Mountain is one of the holy places of Buddhism for Chinese. There are 13 landscapes and almost 10,000 statues here. It is the most popular site of all the carving sites in the Dazu area. There is also a temple here and Stone Carvings Museum.

Originally engraved at the end of the Tang Dynasty and ended at the end of the Southern Song Dynasty. It is the largest stone inscription in the Dazu Rock Carvings, and is located on the North Mountain 2 km north of the Dazu District.  The Beishan area is famous for its exquisite carving, exquisite craftsmanship and elegance. It shows the development and changes of Chinese folk Buddhist beliefs and grotto art styles from the end of the ninth century to the middle of the twelfth century (late Tang, Five Dynasties period, and through two Song Dynasties).

Nanshan is located southeast of the city of Dazu District. There are fifteen statues in the cliff here along with the Jade Emperor Temple. The Nanshan stone carvings originated in the Southern Song Dynasty (AD 1127—1279) and are all Taoist statues. They were supplemented during the  Ming and Qing dynasties.

Shiqi Mountain is located in Fohui Village, Sanqu Town, 25 kilometers southwest of Longgang Street in Dazu District. According to the “Han Xing Ji Monument” of Fohui Temple, the statue was built in the 10th to 1096th period of the Northern Song Dynasty. The statue is about 130 meters long and about 3 to 8 meters high. The stone cliff statues of Shijie Mountain are typical of the “three religions” unity of the interpretation, Taoism and Confucianism.

In Chongqing, you can take a bus from Caiyuanba Bus Station (菜园坝长途汽车站), Longtousi South Bus Station, Longtousi North Bus Station(龙头寺汽车北站), or Chenjiaping Bus Station (重庆陈家坪汽车站) to Dazu County Bus Station. Journey time around two hours. On arrival take either local bus or taxi to the scenic area as below.

From Dazu to the Baodingshan Rock Carving Scenic Area

You can take a bus from either

From Dazu South Station (大足南站) is around one hour by taxi (110 RMB) to Baodingshan. Alternatively, take bus 204 bus to Dazu Bus Station (大足汽车站) which takes around 60 min, and then take the 205 bus to Baodingshan with a total journey time of over 2 hours with waiting times (see the route on Baidu Maps).

Bus or train? It’s really a toss-up. Many prefer the bus.

You can take a train from Chengdu East Station (成都东) which will take between 65 to 85 minutes to reach Dazu South Station (大足南站). Then head from the station as described above.

DoubleTree by Hilton Chongqing – five-star branded hotel with English speaking staff at attractive rates. Centrally located in the heart of Chongqing near to restaurants, shopping, etc.