The four famous mountains of Taoism in China (道教四大名山) are Qiyun Mountain in Anhui, Wudang Mountain in Hubei, Qingcheng Mountain in Sichuan, and Longhu Mountain in Jiangxi. The four mountains are dedicated to the Guangzong Purdue Tianzun, the Zhenwu Emperor, the Moral Tianzun, and the Demon Protector.

Taoism is China’s native religion. The building of Taoist temples on the mountains began in the time of the Eastern Han Dynasty (206 BC–220 AD) and continued until the end of the Qing Dynasty in the early 1900s. 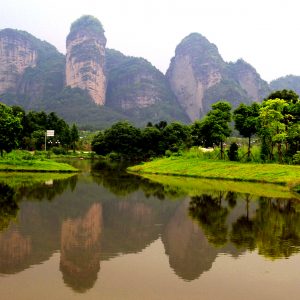 Province: Jiangxi | Height: 1300 meters (4265 ft)
Mount Longhu is located in Jiangxi, China. It is famous for being one of the birthplaces of Taoism, with many Taoist temples built upon the mountainside. It is particularly important to the Zhengyi Dao as it the Shangqing Temple and the Mansion of the Taoist Master are located here. It is part of a UNESCO listed area, a national AAAAA-level tourist scenic spot, and a national key cultural relics protection unit. 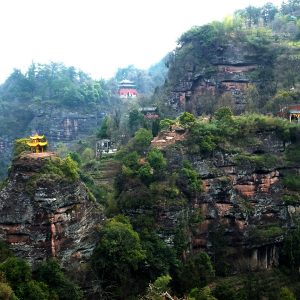 Province: Anhui | Height: 585 metres (1,919 ft)
Mount Qiyun is a mountain and national park located in Xiuning County in Anhui Province, China. It lies some 33 kilometres (21 mi) to the west of Huangshan City. There are 33 temples on the mountain with the most popular being Yuxu Temple, Taisu Temple, Yuehua Street, and Wangxian Pavilion plus there are caves, pavilions and the natural scenery. It is a National AAA tourist attraction. 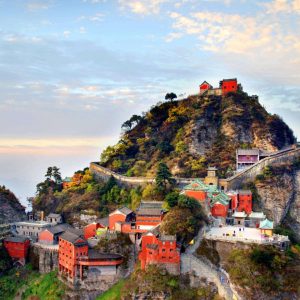 Province: Shanxi | Height: 2,254 meters (7395 ft)
Wudang Mountain is located in the Lüliang region of Shanxi, China. The mountain has over 53 ancient buildings mostly related to Taoism with the highlight being at the top of Tianzhu Peak, where there is the Golden Temple built in 1416. It is the most prominent and representative Taoist building group in Wudang Mountain, and it is also the largest existing copper building group in China. The temple is 5.54 meters high, 5.8 meters wide, 4.2 meters deep and weighs more than 80 tons. Province: Sichuan | Height: 2434 meters (7985 ft)
Mount Qingcheng is located in Dujiangyan, Sichuan, China. It is considered one of the birthplaces of Taoism (Daoism) and one of the most important Taoist centres in China. In Taoist mythology, it was the site of the Yellow Emperor’s studies with Ning Fengzi. As a centre of the Taoist religion it became host to many temples. The mountain has 36 peaks. It is home to Dujiangyan Giant Panda Center and is a UNESCO World Heritage Site and National AAAAA level tourist attraction.