Lost to time and only rediscovered in the late 1800s, the ancient city remains were once China’s first capital under the Shang Dynasty which ruled from 1600 to 1046 BC.

Yinxu (or Yin Ruins) is located on both banks of the Huanhe River to the northwest of the nationally famous historic and cultural city Anyang, in Henan Province of central China. The archaeological remains of Yin are dated from 1,300 BCE and comprise two sites: the Palace and Royal Ancestral Shrines Area, and the Royal Tombs Area covering a total 414 hectares with an enclosing buffer zone of 720 hectares.

Yin has been confirmed by historic documents, oracle bone inscriptions, and archaeological excavations as the first site of a capital in Chinese history. Yin was the political, economic, cultural, and military center of the late Shang Dynasty in China.

At the beginning of the 20th century, the Yin Ruins were famous for the discovery of the oracle bones. In 1928 archaeological excavations began and a large number of architectural sites and rich cultural relics represented by oracle bones and bronzes were unearthed.

The Oracle Bones are the oldest known form of Chinese writing and the first recorded history of China under the Shang Dynasty. Around 150,000 pieces of oracle bones have been unearthed. 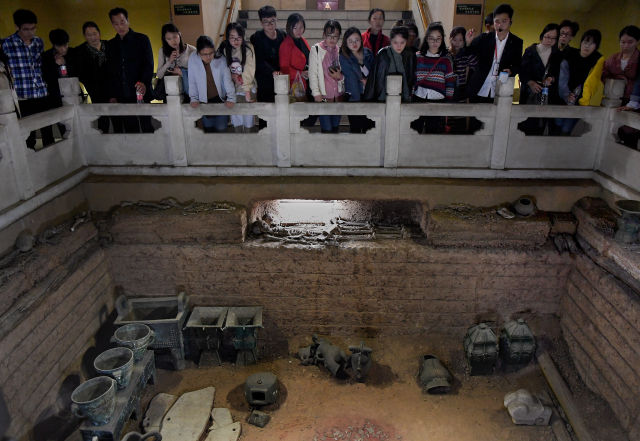 Palace ancestral temple 宫殿宗庙
Ancestral palace ruins cover an area stretching 1000 meters long from north to south, east-west width of 650 meters, with a total area of 71.5 hectares. They were once government offices and homes of Shang Dynasty officials and are the most important of the Yin Ruins. There are more than 80 buildings here including the palace and temple. A large number of oracle bones were unearthed here, along with bronze and jade artifacts.

Nearby is the Fuhao Tomb which is the best preserved of the tombs in the area. The tomb is dedicated to the wife of the Shang Dynasty King, Wu Ding. The tomb dates back to 1250 BCE and was only discovered in 1976. Also located on-site is the Exhibition Hall of Chariot Pits. 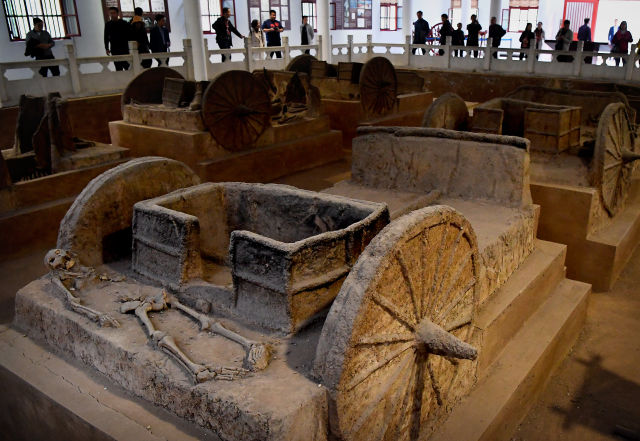 Yinxu Wangling Site 王陵遗址
Located across the river from Yinxu Palace it has a total area of ​​about 11.3 hectares. Since 1934, 13 large tombs have been discovered here, with more than 2,000 burial tombs, ritual pits and chariot pits, and a large number of beautifully crafted bronzes, jade, stoneware, pottery, etc., have been unearthed here. The heaviest bronze artifact in the world was found here, namely the Simu Wufang Cauldron which weighs close to a tonne.

Yubei Plaza 洹北商城
Yubei Plaza is located in the garden of the north bank of the Weihe River in Anyang. The site is 2.15 kilometers wide from east to west, 2.2 kilometers long from north to south, with a total area of ​​about 4.7 square kilometers.

Hun tombs 匈奴墓葬
Recently in 2017, 18 tombs belonging to ancient nomads were discovered. They were built in some time around the late Eastern Han Dynasty to the Wei and Jin Dynasty era’s, about 1800 years ago.

For those who love history and traditional culture, the Yin Ruins is a must. The entire Yinxu landscape is divided into two parts, the Yinxu Zongmiao Palace Relics Reserve and the Yinxu Wangling Site Protection Area. The distance between the two places is 5 kilometers. The one entry ticket covers both two places and the cost of the shuttle bus.

As the area of this scenic spot is quite large, there is a free shuttle bus between different sites, with an interval of about half an hour.

How to get there

Best place to stay in Anyang near to Yinxu

Ibis Anyang Jiefang Ave – four-star modern hotel near to railway and bus station and a short distance by taxi from the Yinxu area.

Nearby Attractions in Anyang

According to the 2nd century Shuowen Jiezi dictionary, the Chinese character “殷” (yīn) originally referred to “vibrant music-making”. Although frequently used throughout written history to refer to both the Shang dynasty and its final capital, the name Yīn (殷) appears to have not been used in this way until the succeeding Zhou dynasty. In particular, the name does not appear in the oracle bones, which refer to the state as Shāng (商), and its final capital as Dàyì Shāng (大邑商 “Great Settlement Shang”).

Among surviving ancient Chinese historical documents, Yin is described as the final capital of the Shang dynasty. There is some disagreement, though, as to when the move to Yin took place. Both the Book of Documents, (specifically, the “Pan Geng” chapter, which is believed to date from the late Spring and Autumn period), and the Bamboo Annals state that Shang king Pan Geng moved the Shang capital to Yin. The Bamboo Annals state, more specifically, that during his reign Pan Geng moved the capital from Yān (奄; present-day Qufu, in present-day Shandong Province), to a site called Běimĕng (北蒙), where it was then renamed to Yīn (殷).(Conversely, according to the Records of the Grand Historian of Sima Qian, Pan Geng moved the Shang capital from a location north of the Yellow River to Bo 亳, the capital of Shang dynasty founder Tang, on the south side of the river—a location inconsistent with the location of Yin.)

Regardless, Yin was clearly established as the Shang capital by the time of Shang king Wu Ding. Wu Ding launched numerous military campaigns from this base against surrounding tribes, thus securing Shang rule and raising the dynasty to its historical zenith.

According to the traditional accounts, later rulers became pleasure-seekers who took no interest in state affairs. King Zhòu, the last of the Shang dynasty kings, is particularly remembered for his ruthlessness and debauchery. His increasingly autocratic laws alienated the nobility until King Wu of the Zhou dynasty was able to gain the support to rise up and overthrow the Shang.

The Zhou dynasty established their capital at Fenghao near modern-day Xi’an, and Yīn was abandoned to fall into ruin. These ruins were mentioned by Sima Qian in his Records of the Grand Historian, and described in some detail by Li Daoyuan in his Commentary to the River Classic, published during the Southern and Northern Dynasties period (420-589 CE). Thereafter, the once-great city of Yīn was relegated to legend along with its founding dynasty until its rediscovery in the final years of the Qing dynasty.