Many people consider bread as a new product into the Chinese food culture but, actually, it has a history almost as long as the nation itself. Grinding grains into flour dates back to the Han Dynasty (206 BC – 220 AD) when mills were introduced from foreign countries via the Silk Road. It is touted that the mantou came into being during this time.

There are several types of Chinese breads and for this article, I am going to focus on the traditional being Mantou (饅頭) and Bing (餅). I will save pastry aka Goudian (糕点) and modern wheat flour bread of Chinese bakeries, aka Mianbao (面包) for a later post.

Generally, Bing is an unleavened wheat bread that is fried on a hot plate and comes in many different variants. 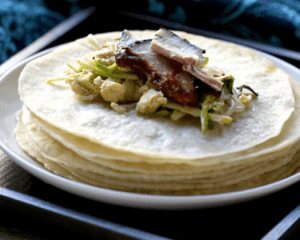 Also known as Spring pancake, it is a paper thin steamed pancake which is commonly used to wrap slices of the Peking duck in Beijing, and a similar style pancake is used for siwawa in Guizhou province. is a type of unleavened flatbread popular in parts of northern China, including Beijing. It is sometimes referred to as a Chinese pancake. 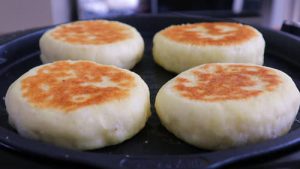 is bing to which yeast is incorporated. It is used to make thick scallion breads. is a layered, savoury, crispy flatbread the Taiwanese version of Cang You Bing, slightly crispy, chewy and delicious pancake that is often sold at street stalls filled with ham or sausage and lettuce/tomato/cheese also called huoshao, is also an unleavened, layered flatbread, but instead of being fried, it is baked. It comes from Northern Chinese cuisine and is made with or without stuffing in sweet and savory variety and can be round or rectangle, covered in sesame seeds or not. 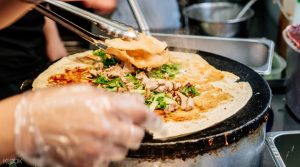 Jian Bing originates from Shandong and is a flatbread that is filled with egg, ham, sauce, crispy fried cracker, pickles, green onions etc. It is a very popular breakfast food at street stalls in China and Taiwan it is called Ji Dan Bing. Another version is Jianbing guozi which is filled with a youtiao stick and egg etc. originates from the Chaozhou area of Guangdong and is a super thin crepe used in a similar way to Chunbing for Peking Duck in that it is commonly used for wrapping different fillings both savory and sweet. It can also be called “moo shu pancake” (木须饼). 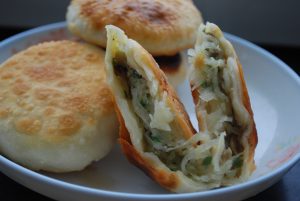 it is almost a pastry, formed from two dough mixtures and filled with shredded radish, then pan fried. is a fermented and leaved dough that is somtimes baked and sometimes fried. It originates from the Shaanxi region and is most popularly used with for the famous Rou Jia Mo (or Xi’an Hamburger) where the bun is filled with meat, typically stewed pork or lamb meat. 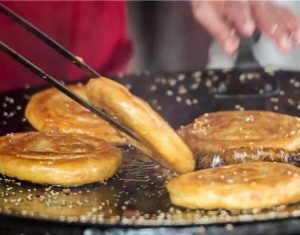 is a kind of flatbread that originates from Shaanxi cuisine, there are many types and it is used in many ways, such as Liangfen Goukui where the bread is cut open and filled with spicy jelly noodles or a different version where the dough is rolled out, topped with pork filling and rolled back up, flattened, and fried in oil on a pan. is a a staple of the Xinjiang region, it is formed from an unleavened dough made from low gluten flour and is baked in a clay oven or Turan.

In the north, it was a staple and in the south where they favored rice over wheat, mantou was sweetened and used as a dessert. When Mantou is stuffed it becomes a bao or Baozi (包子). In Shanxi and Tibet, they have Tingmo which is similar to mantou and when stuffed with filling it is similar to Baozi and called a momo. 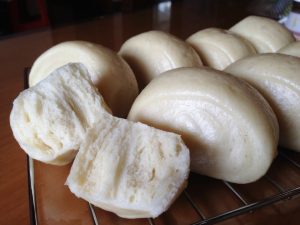 plain mantou is a simple steamed bun made from a leavened wheat flour dough. It comes on many shapes, round, oval, and even creative shapes such as small rabbits. 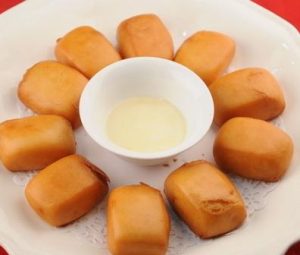 Steamed mantou that is then deep fried. Gold and Silver Matou is a dessert dish featuring plain and deep fried mantou served together with sweet condensed milk. 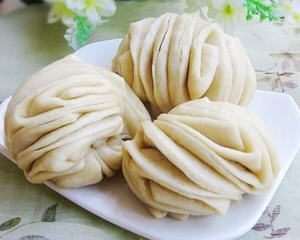 Often called Mandarin rolls, they are made similar to mantou with the addition of sugar, soybean oil, vegetable shortening, and milk powder. Sometimes they are sweetened with condensed milk and sometimes they are savoury with salt and spring onions/scallions added. They are formed into layers before steaming. The mantough dough is seperated into two batches with flavoring added to one, then flattened, layered and rolled, cut and steamed. These are popular in the Chinese diaspora where you will see many flavors such as pandan, chocolate, red bean, green tea, etc. 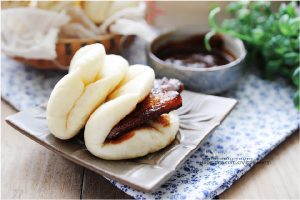 a foldable mantou which is often served with braised pork belly such as the popular Gua bao. 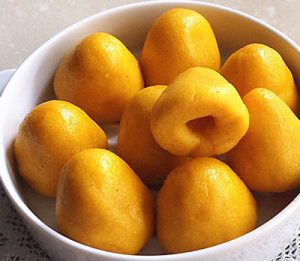 A staple from northern regions of China, wotou is made with corn flour and a small amount of soy flour. It is lightly leveaned with baking soda.